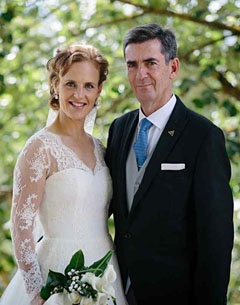 Aboard the PRE stallion Impaciente II, the now 36-year old Jauquicoa competed at international Grand Prix level shows from 2009 till 2012. Teresa is an equine physiotherapist by profession while her husband Fernando has no connection to horses. The couple will go on a honeymoon to Paris at a later date.

The 59-year old former Dutch Olympic team rider and trainer Coby van Baalen has been knighted in the Order of Oranje-Nassau on 1 October 2016. Her work for the DVB Foundation, which supports disabled riding, was the reason and cause for Van Baalen's decoration. The mayor of Coby's home town Zaltbommel surprised Van Baalen with the distinction at a small party. Coby is also ambassador for the Prince Willem Alexander Stable in Amsterdam and Bio Barn in Arnheim.

Enzo Truppa, international 5* dressage judge and trainer, has lost his third appeal with CONI (Italian Olympic Committee's Sport Arbitration) against the decision of the Italian Equestrian Federation to suspend him from all his functions with FISE after selling Valentina Truppa's top Grand Prix horse Eremo del Castengo in December 2015. Truppa broke his contract with FISE to keep the horse until the 2016 Olympic Games. Since 2012 Truppa received 70,000 euro per year from FISE (30% of the federation's yearly budget for dressage!) to preserve Eremo for Italy as an Olympic candidate. From 2012 till 2015 Truppa had received 280,000 euro to keep Eremo and qualify for the Olympics, which Valentina did, but the horse was not to be sold. Truppa motivated his sale in writing to the federation by stating that the horse was no longer in optimal fitness condition. The sale to Dr. Jorge Da Rocha took place nonetheless with a legal battle about suspension and contract breach between Truppa and FISE following. Truppa lost all three appeals against his suspension. The lawsuit about the contract breach is scheduled for November 2016.

Victoria Michalke (26) and her 27-year old boyfriend, show jumper Denis Nielsen, are setting up shop together as of 1 January 2017. Nielsen has been an assistant trainer at Gestut Sprehe for almost 10 years but is now starting his own sales and training business at Gut Daxau, the yard owned by Susanne Michalke, mom to German B-team dressage rider Victoria Michalke. 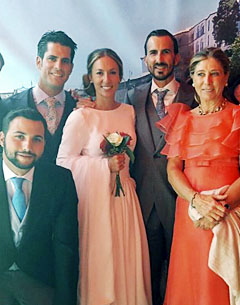 Spanish Grand Prix rider Alfonso Expósito Santisomarried Maria Carnerero on Saturday 8 October 2016 in the Basilica of San Lorenzo El Escorial in Madrid, Spain. The 30-year old Exposito has competed internationally since 2014 but only at CDI's held in Spain. His top Grand Prix horse is Triguena IX (by Xantino). The wedding happened in attendance of follow dressage riders Borja Carrascosa Martínez, Cristian Tudela Ruiz, Jose Carlos Castillo, Ivan Nieto Sanchez and Severo Jurado amongst others. The 31-year old Carnerero is also a dressage rider, who has competed internationally twice at the 2014 CDI Barcelona on the then 6-year old Joyero VG (by Corinto X), who is now owned by Annabelle Collins and competed by her husband Agusti Elias.

Parry Thomas' renowned River Grove Farm in Hailey, Idaho, is listed for sale for 19,500,000 USD with Sotheby's International Realty. River Grove Farm has been the home training base for U.S. team riders Debbie McDonald and Adrienne Lyle, who were sponsored by the Thomas family. On 26 August 2016 Parry Thomas passed away at age 95.

The 15-year old Dutch young rider Thalia Rockx became the youngest Grand Prix rider in Dutch equestrian history. Rockx competed her father Johan's home bred GP schoolmasterVerdi de la Fazenda (by Florett As) at the regional show in Maren-Kessel and scored 68.55% on her Grand Prix debut. The age record was previously held by Jeanine Nieuwenhuis, who made her national GP debut at age 17.