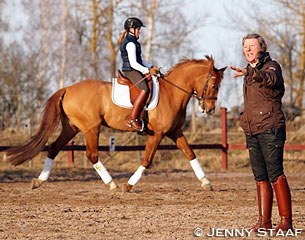 The Swedish equestrian federation has appointed Pytt Hamburg as the new Swedish Dressage Pony Team Trainer. She will be replacing Bobo Lundberg who has resigned from that position.

Lundberg has been on the job for five years and Hamberg will be taking over as of 1 January 2017. Lunberg wants to concentrate more on the sport career of his daughter Karoline, who will be competing two home bred younsters: Sir Price (by Sir Donnerhall II) and Angelina (by JJ RayBan).

Hamberg, who is a riding instructor at the Djursholm riding school, runs her own yard near Arlanda, Sweden where she trains and breeds dressage ponies. She has competed Dionysos (by De Niro x Rubinstein) up to Intermediaire I level.

"I was surprised and very happy when I got asked," Hamberg explained. "One goal is to broaden the top of the national team so there will be a larger head group. We will make an inventory of the riders who are interested to compete internationally next year and work on the development of pony dressage."