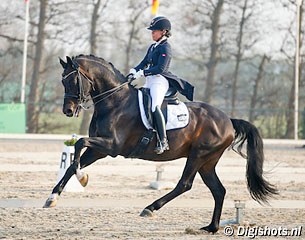 The 16-year old Dutch warmblood Wup has been retired from competition sport. Owner Romee van Paassen announced that the horse's ill health has forced her to make this decision.

Wup is a KWPN bred stallion by Welt Hit II out of Jolinda (by Wolfgang). The dark bay stallion is bred by J.C. van Hout.

Initially owned by Olthof horses, Wup was shown by Joyce Heuitink in the 6-year old classes at the 2007 CDI Vierzon. The stallion made his international Grand Prix debut under Leida Collins-Strijk at the 2008 CDI Mondorf les Bains. Two years later the horse was leased to Malaysian Qabil Ambak who competed him at the 2010 Asian Games in Guangzhou. They finished with bronze.

Under Joyce Heuitink, Wup was further shown at international Grand Prix level in 2013. The duo contested the CDI's in Doha, Mannheim, Roosendaal, Arnheim, Lingen, Hickstead and Mechelen. Their last event together was the 2014 CDI Doha, where they finished 20th with 62.480%.

Wup sold at the 2014 Excellent Dressage Sales to then pony rider Romee van Paassen for an advertised auction price of 230,000 euro. The horse became a schoolmaster for Van Paassen and introduced her to junior riders' level. They showed at the 2014 CDI Hagen, and in 2015 at the CDI in Nieuw en St. Joosland and Roosendaal. The latter event was their last international.

"Unfortunately there is an end to luck and Wup is having a hard time, which hurts me badly," Van Paassen stated. "We're doing our best to make him feel better, so that he can be a happy horse and enjoy his life. He's still young enough to stand in the field and enjoy fun rides."

Van Paassen announced Wup's retirement at the beginning of February 2017.