Two Horses in the Holding Box at 2017 European Dressage Championships 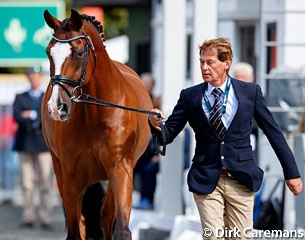 The 2017 European Dressage Championships in Gothenburg, Sweden, are on the verge of kicking off with the first part of the Grand Prix starting on Tuesday 22 August 2017 at 15h00. The mandatory horse inspection was held today, Sunday 20 August, and all horses passed the trot-up expect two, Don Carissimo and Bariloche JGR.

The horse inspection serves as ultimate deadline for team composition. Horses appearing at the trot-up are the definite team and individual horses that will move on to the Championships if they pass the inspection.

The British team made a last minute change with Emile Faurie bringing his reserve horse Lollipop (by Lord Sinclair x Welt Hit) to Sweden instead of Weekend Fun, who sustained a minor injury. Owned by Russian Elena Knyagincheva, Lollipop is a 13-year old gelding which Emile successfully competed most recently at the 2017 CDIO Aachen and made it into the Kur to Music finals. 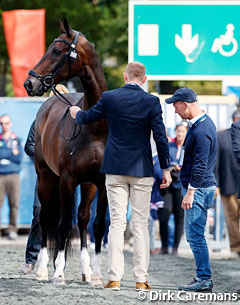 Two horses did not pass the trot up today and were sent to the holding box: Gareth Hughes' Don Carissimo (GBR) and Vasco Mira Godinho's Bariloche JGR (POR). Both horses will be re-inspected on Monday morning at 7h30.

The Swedish home team had a brief scare when Rose Mathisen's Zuidenwind was also referred to the holding box, but with the second trot up a bit later he passed.

Dressage will take place in the massive Ullevi sports stadium which has a capacity of 40,000 spectators. The dressage arena lies in the middle of the ring at quite a viewing distance. Also the riders will have to go quite a stretch from the 10-minute ring into the main stadium but this happens regularly at continental championships.

On Monday morning the riders will get a second opportunity to train in the main stadium. The Grand Prix class is scheduled for the afternoon and the evning part will be ridden under floodlight.

Photos © Dirk Caremans - Check out Dirk's website for a complete gallery of the horse inspection.