Damsey FRH: From the Verden Auction Arena into the International Limelight 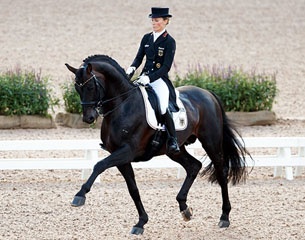 The team competitions at the 2017 European Championships in Gothenburg, Sweden, were pretty exciting. What quartet would be the best? The German team finally triumphed and won the desired title, among them the Hanoverian Damsey FRH. Three months ago, they had won their first international Grand Prix-freestyle, the duo Helen Langehanenberg and Damsey FRH are team European Champion.

They presented an amazing Grand Prix-performance and finished with the fourth best result. Germany won the title for the 23rd time and is again the undisputed number one in the dressage arena.

Damsey FRH was born at the yard of Dorit and Hermann Kothe who were running a stallion station at the Alsenhof in Wacken at that time. “He was the foal out of one of our first breeding combinations with our stallion Dressage Royal,” says Hermann Kothe. Dam Ria Grande was accorded a special honour: She was nominated 2013 Hanoverian Mare of the Year.

Dutchman Hans Miedema purchased the 2.5-year old youngster at the Verden Stallion Market in 2004 as a non-licensed stallion. He was licensed one year later at the April saddle licensing, where he became the only premium stallion after winning the 30-day stallion performance test in Adelheidsdorf. Damsey briefly moved to Ferienhof Stucker in Weeze, where Wilbers introduced the stallion to Jens Meyer, who then alerted Doug and Louise Leatherdale. Right before Christmas 2015 the American couple acquired Damsey and moved him to Jens Meyer's stallion station. With Louise Leatherdale, he has a perfect owner who supports his career with great commitment. 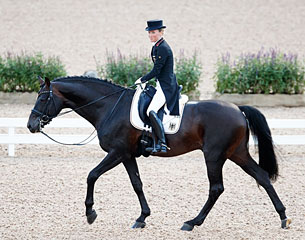 Steffen Frahm, former rider at the stallion station of Jens Meyer in Dorum, had been responsible for the basic training of Damsey FRH before Helen Langehanenberg started to ride him two years ago. Excellent results achieved at the Federal Championships, the FEI World Breeding Dressage Championships for Young Horses and at the Final of the 2015 Nuremberg Cup were the reason why the duo was finally nominated to compete for the German Nations Cup team in Rotterdam.

„Damsey’s highlights are his basic gaits and his piaffe-passage-tour,“ praises Helen Langehanenberg. He was difficult to describe: “He has his own character. He is very kind, but he knows exactly what he wants,” says Helen Langehanenberg with a smile. And sometimes he was quite studdish. But that’s ok, at least the chocolate-brown stallion has been in the breeding business for a number of years now and has established an excellent reputation as producer of dressage horses. Super results at the beginning of the outdoor season 2017 rocketed Damsey FRH and Helen Langehanenberg into the German championship-team and to the European Championships in Sweden. 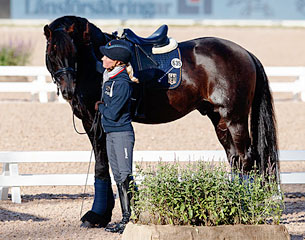 Damsey FRH and Helen Lagehanenberg – this is the youngstest success story of a Hanoverian horse whose career started at one of the Verden auctions to be then continued at the international sports level.

There will be another opportunity to create new success stories on October 13 and 14 at the 134th Elite Auction. It will be the first time that the Verden Foal Gala Presentation on Friday evening will introduce the auction event. Top-class riding horses will be put up for auction on Saturday and – also for the first time in the long history of the Verden auctions – two-and-a-half year old stallions in-hand.