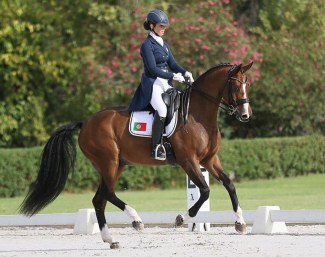 Gronskovlunds Romeeo is a 2010 born Danish warmblood gelding, bred by Kim Viberg Jensen. He is by Skovens Rafael out of Roxette (by Rotspon).

He was first competed in Denmark in 2015 by Jeanet Friis Wagner before being scouted by German horse dealer Jochen Arl, who purchased the horse and then sold it to his business associate Maria Pais do Amaral in Lisbon, Portugal in the autumn of 2016.

Amaral made her international show debut on the bay gelding in March 2017 at the CDI-YH Medina Sidonia in Spain, where they finished second. In May they contested the CDI Segovia before representing Portugal at the 2017 World Young Horse Championships in Ermelo, The Netherlands, where they finished 8th in the consolation finals for 7-year olds.

Maria has trained Romeoo up to schooling Grand Prix level with the help of her husband, Portuguese Grand Prix rider Rodrigo Torres. She sold the horse to Akiko Yamazaki, who is based near San Francisco, California, last week.  Akiko plans to ride Romeeo herself.

"That Romeeo learned most of the GP movements in the 15 months that he was with Maria shows you how exceptionally talented, intelligent and willing he is," Akiko told Eurodressage. "On top of that, he instantly felt like my horse. We communicated well. He also has a very happy personality. I hope to ride him for the next few years myself. I feel he may also be an excellent horse for my daughters in the future."

Aside from being an accomplished FEI rider in her own right, Yamazaki is the longtime sponsor of U.S. team Olympian Steffen Peters (Ravel, Legolas, Rosamunde, Suppenkasper). With her Red Husky Foundation she is the main contributor to the USEF Developing Dressage Program and she was the lead investor for the Sandronnerhall syndicate, which acquired Adrienne's Lyle's current WEG team hopeful Salvino in Spain in 2015.

With the purchase of Romeeo, Akiko has found her fifth horse through Arl. She bought small tour horses Donevan, Chopin and Romeeo for herself, Rosamunde for Steffen and Salvino for Lyle.

"I'm thrilled to sell another super talented, rising Grand Prix horse for Akiko," said Jochen Arl. "I am proud to have provided a steady stream of high performance dressage horses to the U.S.A. over the past five years, that are now dominating the Grand Prix show scene."

On the current U.S. Ranking List for the 2018 FEI World Equestrian Games, Steffen Peters and Rosamunde are standing second with an average Grand Prix score of 73.544% while Adrienne Lyle on Salvino is fifth with 72.978%.