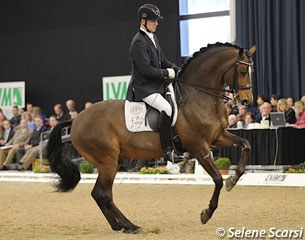 The Warendorf state stud is doing some major damage control after its reputation got a big blow when a raid was carried out at the stud and managing director Susanne Schmitt-Rimkus, head stable manager Peter Borggreve and deputy director Bernhard Gerdemann are being prosecuted for fraud.

Warendorf is owned by the federal state Northrhine-Westfalia and paid for with tax money. Ankerhold was appointed new managing director to clean up the heritage stud yard and make it successful again.

One of her first actions was re-assessing the stallion roster and removing stallions from the programme that are of little interest to breeders.

Three dressage bred stallions have been sold. A few weeks ago it was announced that they sold the 6-year old Symphonic (by Sir Heinrich x Windspiel As x Brentano II) to Rüscher-Konermann after the stallion developed some soundness issues this spring.

"The 19-year old Laureus is now a pensioner and enjoying his easygoing lifestyle. Dolby Surround was sold because sometimes we have to sell stallions to be able to buy new hopefuls," NRW press officer Pia Kemper confirmed to Eurodressage.