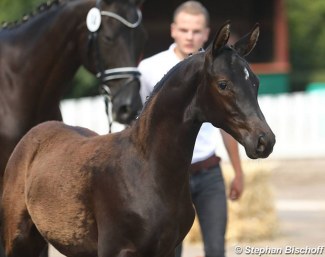 Two foals - Inzaghi and Iniesta - sold for the same top price of 26,000 euro at the annual foal auction organized by the Trakehner society during the Trakehner Championships in Hanover, Germany.

The 2018 Trakehner Championships took place on 8 July 2018 and a collection of 21 foals came up for auction. One foal did not sell, two sold abroad, the rest stays in Germany.

The colt Inzaghi (by Mescalero x Songline) and colt Iniesta (by Impetus x Montafon) both sold for the highest auction price of 26,000 euro.

The second highest price paid was 23,000 euro for colt Tristan (by Rheinklang x Guzzi). He moves to Austria.

Fabregas (by Helium x Montafon) fetched 18,000 euro. Another Helium offspring, colt Rheinglanz (out of a Couracius dam) sold for 14,500 euro.

The average price for a foal at this auction was 11,185 euro.