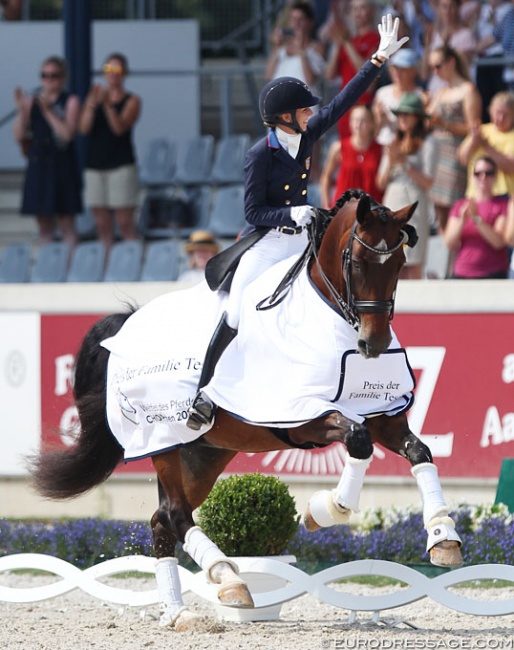 American Laura Graves and her 16-year old Dutch warmblood gelding Verdades worked to their strengths and won the 5* Grand Prix class at the 2018 CDIO Aachen in Germany on Thursday 19 July 2018.

The 2018 CDIO Aachen was the first battle of the bulge since the World Cup Finals in April with the world's best dressage meeting each other in a first outdoor match before the year highlight at the World Equestrian Games. Several top riders strategically avoid competing at Aachen, others dealt with unfit horses, and some opted to use a five-star event such Aachen as their surprising CDI come back show!

Despite the absence of some of the top Brits as well as German cannon balls Weihegold, Cosmo and Desperados, the CDIO 5* tour was still a super exciting class to watch with unexpected twists and turns. It had all the ingredients for an appetizing dressage competition.

Going into Aachen, American Laura Graves and Verdades (by Florett As x Goya) were the hot favourites for the number one spot with Isabell Werth on Emilio and Cathrine Dufour on Atterupgaards Cassidy as their biggest rivals. Graves lived up to her role, Dufour was as accurate as ever before even though Cassidy lost some edge in passage, Werth and Emilio did not find their groove, Helen Langehanenberg and Damsey were the major come back kids and Kasey Perry-Glass and Gorklintgaards Dublet the thrill of the day.

Graves and Verdades always stand out with the ease, lightness and energy with which they perform a Grand Prix test. It was no different today. In trot, the horse had wonderful extensions and ground covering half passes, but overall the nose needed to be more out. The second trot extension was on two tracks. The passage was very electric but in piaffe the gelding did not move the hindlegs towards the point of gravity, but instead he swung them sideways out from under the body, today even more so.The extended walk was a bit underwhelming with only one hoof overtrack and no real stretch out over the back even though Verdades walked in relaxation. The canter work had several highlights: the two tempi changes were excellent, the extended canter powerful and uphill and the zig zag ground covering, yet hectic at the start. The left pirouette was too big (score 7.9), the right one much better. Verdades is one ball of energy and despite some heavy breathing in canter, he always gives it his all. Also the final centerline was electric but the horse was slightly bent to the right and there was a small glitch in the final piaffe at X in which he lost the rhythm (6.6).

The CDIO Grand Prix was judged by a panel of seven like at an (inter)continental championship. The ground jury included 5* judges Annette Fransén-Iacobaeus, Katrina Wuest, Andrew Gardner, Anne Gribbons, Susan Hoevenaars, Hans-Christian Matthiesen, and Mariette Sanders-Van Gansewinkel. Six of them placed Graves first, one had them second. They won the class with 80.606% and had scored raning from 79.239% to 82.609%.

Danish Cathrine Dufour and her 15-year old Danish warmblood Atterupgaards Cassidy (by Caprimond x Donnerhall) are special in their own way. Dufour's total concentration and accuracy are unparallelled and the talented rider who comes through the programme from ponies, has pulled the best out of her chestnut gelding which was just supposed to be her young rider's horse. Cassidy showed lovely trot extensions with the nose exemplary out and the poll up. There was much relaxation and balance in the half passes and the extended walk was simply outstanding. Unfortunately the passage is no longer improving and on contrary becomes more disconnected and swinging in the fore- and hindquarters.  Today the right hind leg was also not properly tracking up. The piaffe is quite small but rhythmical and on the spot. There was a miscommunication in the second passage. The two tempi changes were outstanding, the ones could have more ground cover. The extended canter was very good and the zig zag correct. The pirouettes were very small, with the right one being too small almost. The final passage was well regulated but not in ideal self carriage. They scored 78.494% which landed them second. Their marks went from a 75.978% to an 80.870%

Less than a month after giving birth to her second child, Helen Langehanenberg was back in the saddle of Louise Leatherdale's 16-year old Hanoverian stallion Damsey (by Dressage Royal x Ritual) to secure her spot on the German WEG team. The rider had a stellar winter show season but missed out on the outdoor shows because of her pregnancy. She had to deliver in Aachen and show form to grab a spot on the team, and that is exactly what she did. Damsey is not the most forward horse out of his own, but with her electric heels Helen is able to get the best out of the chunky dark bay. The trot extensions were big, but on the forehand. The half passes had good crossing of the legs but there should have been more bending to the right. The first passage was active but lacked collection, the first piaffe had a very nice rhythm but traveled forward. The extended walk was huge in overtrack. The second passage was active, but as soon as Helen moved her legs away from the horse, he lost all steam and this right before the canter strike off. Damsey had several strong points in canter with  very straight two tempi changes and a strong extended canter. In the zig zag there was not equal ground cover to the left and also the ones could have been bigger. Despite a tilt to the left, the final passage centerline was lovely. The pair scored 77.034% and must have secured their spot on the German team with this third place.

German Jessica von Bredow-Werndl has a new star in Beatrice Burchler-Keller's 11-year old Trakehner mare Dalera BB (by Easy Game x Handryk) with the scheduled retirement of Unee BB at 2019 Equitana. The bay mare showed huge extended trots and flowing half passes. She had a very nice and steady rhythm in piaffe and passahe but could have been a bit more up in the bridle in piaffe. The clarity of the rhythm in the extended walk was not ideal and she became lateral in the collected walk (6.7!).  The two tempi changes were very straight but the back could be more elastic. The zig zag was good despite a bit of tension at the onset. In the one tempi changes the mare still swings. The last extended trot was super. They scored 76.848% to finish fourth with marks going from 74.674% to 79.239%.

For the first time at a CDI, American Kasey Perry-Glass retrieved the stellar form she once showed at the CDIO Compiegne back in 2016. All pieces finally fell together again and her 15-year old Danish warmblood Gorklintgaards Dublet (by Diamond Hit x Ferro) was fantastic in Aachen today. The horse is quite mouthy and only flashed the tongue once, licking his lips in the right half pass, but for the rest of the test he kept it inside while Perry sustained a very light and elastic bridle contact. The trot extensions were good, the half passes quiet. The collected trot was a bit over collected even and overall the nose had to be more out at the vertical, but the piaffe and passage were outstanding with a flawless rhythm and suave transitions to and from. The extended walk was ok, the collected weak in clarity. The tempi changes were excellent and the zig zag very nice. The right pirouette was super, the left one had a bit less scope. The final centerline was excellent. They posted 76.801% for fifth place with scores going from 75.326% to 78.696%.

So what happened to Isabell Werth and Emilio? They finished 17th with 72.516%!  They were the last pair to go in the class and expected to challenge Graves' score after an outstanding CDI Fritzens three weeks ago. Werth and her 12-year old Westfalian gelding (by Ehrenpreis x Cacir AA) began with a very nice medium trot with the nose forward. The half passes had good crossing but there could have been more suspension. The first passage was nice, but Emilio struggled to find the rhythm in the first piaffe and made a levade on his hindlegs (this piaffe remarkably scored between 2.0 and 7.5 !!). The bay gelding relaxed in the extended walk which had good overstep, but the collected walk was very short. Werth was on her guard now and in the second piaffe the same scenario happened. Isabell took all pressure off her horse and tried to steer fault-free through the rest of the test, but there continued to be small miscommunications and a mistake in the two tempi changes followed. The left pirouette was nice, the right one needed more balance (7.4). The extended canter was well ridden. In the final centerline in piaffe and passage Werth played it safe and Emilio was back in rhythm. Her individual marks went from 70.761% to 74.457%.

The CDIO Grand Prix test had much more interesting riding. Dorothee Schneider and her 2017 European Championship team horse Sammy Davis Jr (by San Remo x Wenckstern) underwhelmed a bit today with his trailing hindlegs and the not so even trot half passes, but in piaffe the sympathetic bay does his best to lower the haunches and the two tempi changes were nice and straight. They scored 75.916% for sixth place.

Swedish Therese Nilshagen and the 11-year old Oldenburg stallion Dante Weltino (by Danone x Welt Hit II) slotted in seventh. The gorgeous black is a real eye catcher and the very friendly image they paint and soft contact is a pleasure to watch. However, one even wishes the horse to reach a bit more for the contact instead curling himself up. The tempi changes were lovely, the pirouettes as well but today the hindlegs could have reached more under in passage and the horse needed to be more up in the bridle. They scored 75.373% but had scored going from 73.152 to 77.500%.

Highest scoring Dutch rider was Emmelie Scholtens on the 13-year old KWPN stallion Apache (by UB40 x Krack C). The tall dark bay stallion is always up in the bridle and achieves huge ground cover in the extensions. The two tempi's were nice, the ones croup high at the start. Today the passage was a bit unbalanced with the horse swinging in the fore- and hindquarters and in piaffe he could show more suspension. The pirouettes were small and the zig zag well ridden. They scored 74.627 for 8th place.

American Adrienne Lyle and the 11-year old Hanoverian stallion Salvino (by Sandro Hit x Donnerhall) slotted in 9th with 74.581%. The gorgeous black stallion showed great ground cover in the trot extensions but leaned on the forehand. The tempi changes were big and the pirouettes small. The horse very energetically picks up his feet in piaffe and passage and while the piaffe has great potential to sit, the passage is very disconnected in the body with the horse struggling to find proper suspension and regularity in the rhythm. The extended walk was very nice and the final centerline had the best passage as the rider was able to muster more forward energy.

Danish Daniel Bachmann Andersen and the 14-year old KWPN stallion Blue Hors Zack (by Rousseau x Jazz) completed the top 10 on a 74.117% score. The bay rushed a bit in the trot extensions but the half passes were smooth and fluent. The extended walk, zig zag and one tempi changes were very nice, but the left pirouette was somewhat big. They scored 74.177%

Team U.S.A. is currently in the lead for the Nations' Ranking but points from the Grand Prix Special still need to be added for the final ranking. The GP Special is on Saturday 21 July 2018.