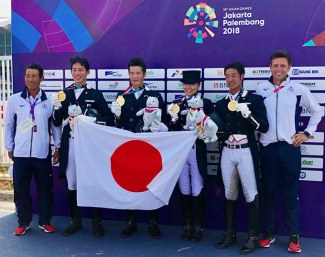 The team competition was contested over the Prix St Georges and the Japanese dressage riders took top honour in the team ranking, despite finishing not entirely at the top of the board. Japan's three counting team results proved high scoring consistency and with a fourth, fifth and seventh place in the ranking, Japan totaled the highest average of 69.499%.

Japan's leading dressage rider was 2016 Rio Olympic Grand Prix rider Masanao Takahashi, who dropped his 19-year old Hanoverian Fabriano (by Florestan x Angelo xx) down to small tour level for this last continental championship for the experienced horse. The pair scored 69.823% in the Prix St Georges and placed fourth. Right behind them were 2016 Rio Olympic team rider Akane Kuroki, who also dropped her 18-year old Dutch warmblood Toots (by Jazz x OO Seven) down to small tour level for the Asian Games. She scored 69.675% and was fifth. The 27-year old Shunsuke Terui steered the 11-year old Holsteiner bred Alias Max (by Aljano x Lorentin) to a seventh place with 68.999%. Kuroki's stable mate in The Netherlands, Kazuki Sado on the 10-year old Dutch warmblood Djuice (by Jazz) was the scratch score despite his ninth place with 68.793%. The Japan dressage team is coached in Jakarta by German Christoph Koschel, who throughout the year has been assisted by the team of Hof Kasselmann to achieve this result.

The Korean team landed the silver medal with a team average of 68.440%. Their leading rider was the 23-year old Hyeok Kim on the 11-year old Hanoverian Degas K (by De Niro x Walt Disney I). Two years of training and competing in Germany and Europe have paid off as Kim finished second in the Prix St Georges with 71.235%. Further contributing to Korea's team silver were 36-year old Kyunsub Kim on the 12-year old Hanoverian mare Sonnenschein (by Salito), who finished 10th with 68.440%, and the 29-year old Dongheon Nam on the 14-year old Baden Wurttemberger bred Release (by Royaldik). He landed 18th place with 65.646%.

Team bronze went to Thailand, who's campaign to the podium was spearheaded by the 24-year old Pakjira Thongpakdi, who steered the 15-year old Hanoverian mare Hispania (by Hofrat) to an 11th place with  68.117%. She was assisted by Arinadtha Chavatanont (25) on the 11-year old Dutch warmblood gelding Clapton C (by Jazz). This duo ranked 13th with 66.146%. Thai team routinier Chalermcharn Yotviriyapanit (39) on the 12-year old Westfalian bred Jazz Royal (by Jazz Rubin). This pair scored 65.882 to place 15th. Thailand averaged 66.715% for bronze.

The highest score in the Prix St Georges came from individual rider Qabil Ambak on the 12-year old Hanoverian Rosenstolz (by Rotspon). The Malaysian, who is trained by Dennis Fisker in Denmark, scored a whopping 74.881% for the victory in the team test. British based Hong Kong rider Jacqueline Siu slotted in third on the the Westfalian gelding Furst on Tour (by Furst Heinrich) with 70.735%. The Hong Kong Racing Club acquired the black gelding from German European Junior Riders' champion Anna Abbalen specifically for Siu as her 2018 Asian Games' ride.