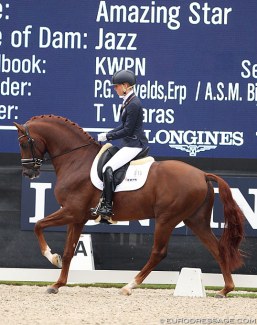 Singaporean Titan Wilaras and his struggling Platinum Stables in The Netherlands have sold their two top horses, Eye Catcher and Five Star, to Andreas Helgstrand in Denmark.

Wilaras' Platinum has been struggling to find staff continuancy in the last five years and has regularly made the Dutch news with debt claims. Well known dressage riders Markus Gribbe, Tommie Visser, Robin Beekink, and Michelle van Lanen all briefly worked at Platinum stable but left after a short period of time, before the Brouwer family was hired to manage the yard the spring of 2015.

Wilaras had the most success with his horses with Kirsten Brouwer aboard his youngsters.

After two years ago a major fall out between Wilaras and the Brouwers led to the ending of their collaboration. Wilaras was also sued by several creditors for open bills and in April 2018 it came close to an executorial sale of the property.

As the Brouwers moved out of the facilities in November, the Spanish brothers Antonio and Miguel Laiz Zandio moved in a few weeks later. Antonio Laiz Zandio successfully competed Eye Catcher at international small tour level in 2018 and won the 2018 Spanish Small Tour Championships, but Five Star never went to a CDI.

Exactly one year later, in December 2018, the Singaporean-Spanish collaboration came to an end. Belgian based Ukrainian Inna Logutenkova took on the ride on Eye Catcher and presented him at the 2019 KWPN Stallion Licensing

In November 2018 rumours spread that Helgstrand bought Platinum Stables in Riel, The Netherlands, but these claims were denied by both Wilaras and Helgstrand at the time.

Today Helgstrand announced that Wilaras' stallions have been sold to him as sales horses.