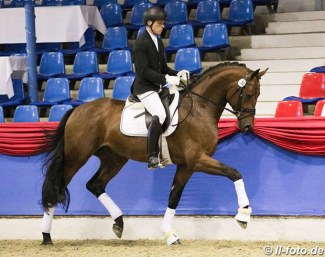 Fynch Hatton was named the champion of the 2019 Oldenburg Saddle Licensing in Vechta, Germany, on 5 April 2019.

Fourteen young stallions were presented to the Oldenburg licensing committee and five received a positive verdict.

"We have seen a wonderful stallion here. From the test rider Beatrice Buchwald he got the highest mark 10.0. His look and his sovereignty are an example par excellence – a pearl for breeding, "described Oldenburg's breeding director Dr. Wolfgang Schulze-Schleppinghoff the champion.

At the auction following the licensing on 6 April 2019, Fynch Hatton became the price highlight, selling for 260,000 euro to Andreas Helgstrand in Denmark.

The Reserve Champion title went to the 3-year old What’s Up (by Weltmeyer x Sir Donnerhall I - Rohdiamant), bred by Stutteri Uno from Denmark. He sold for 88,000 euro to Germany

The third ranked premium stallion was the 3-year old Bon Akzent (by Bon Coeur x Akribori - Akzent II), bred by Volkhard Folkers from Wanderland, Germany and owned by Blue Hors stud. He sold for 85,000 euro to a German customer.

Also licensed were San Diego (by Santo Domingo x Donnerschwee), which sold to a German client for 93,000 euro, and Focus (by Formel Eins x Roman Nature), which sold at auction for 35,000 euro to Austria.