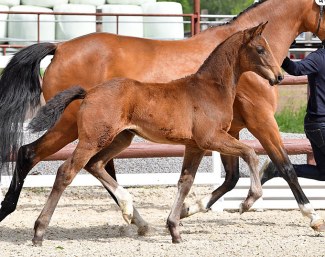 This is it! The 6th online auction for foals sired by stallions from the Paul Schockemöhle stud is almost coming to an end. You can place your final bid on 11 June 2019 at 7 PM.

Never before has it been so easy to buy top offspring by Schockemohle stallions - from anywhere in the world.

At the well visited selection day, the foals were rigorously chosen according to high standards. And so the 16 dressage and show-jumping talents offered are united above all by one thing: their outstanding quality and potential, genetically secured by proven dam lines!

In the dressage collection you will find offspring by Totilas (2010 World Champion), Vitalis (Nurnberger Burgpokal winner), Bordeaux (participant at the 2017 European Championships, the elite sire Fürstenball OLD and the recent Burgpokal qualification winner Total Hope. You will also find offspring of the newcomer sires Dante’s Junior, Fürst Toto and Zenon.

In the show-jumping collection there is offspring by Presley Boy (World Championship show-jumper), Chacoon Blue (placed in the show-jumping world ranking), Chacfly PS (record scoring stallion in performance test) and the proven Conthargos.

Dark bay filly Zenira (by Zenon x Fidertanz x De Niro) has Zonik as grand side. He was seventh at the World Championships and eighth at the World Cup under Edward Gal. Sire Zenon completed his stallion performance test in Adelheidsdorf with high individual scores and an overall average of 8.66 placing him third. Dam sire Fidertanz, NRW Champion Stallion, Vice German Champion and internationally successful in Grand Prix competitions, has produced over 50 licensed stallions. Amongst his numerous successful offspring is Mount St. John Freestyle, who won double bronze at the World Equestrian Games in Tryon/USA with Charlotte Dujardin/GBR

Get to know the collection of foals on the official website. You will find detailed information of their breeding and videos of the foals.

Bidding is also very easy once you have registered for free on the website. Of course, we remain at your disposal for any questions you may have.

The sixth edition of our online foal auction ends on June 11th at 7 pm.

Ready for the future? Do not hesitate and find the foal of your dreams at https://ps-online.auction