Photo Report: Werth and Klimke In the Spotlight at 2019 CDI Wiesbaden 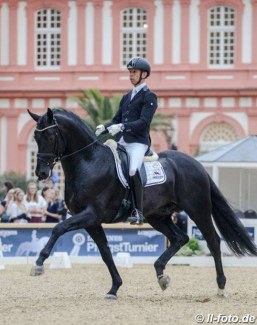 Isabell Werth and Ingrid Klimke rode themselves in the spotlight at the 2019 CDI Wiesbaden which took place during Whitsunday weekend on 8 - 10 June 2019.

The international dressage competition in Wiesbaden is probably one of the most beautifully situated shows in the world. With a pink castle in the backdrop of the dressage arena, there is hardly any setting more picturesque than that. In the 1990s Wiesbaden was part of the magnificent "Classic Castle Cup", organized by judge Mariette Withages. A series of CDI's throughout Europe set in a castle park, including Schoten, Ludwigsburg, and Goodwood for instance,gave that extra bit of posh and style to dressage competition. Unfortunately Wiesbaden is the only show that survived to this date and surprisingly the dressage part seems to loose traction year after year.

The Wiesbaden organizers have been playing with the format the past few years but it just can't seem to bring together a high profile, international field outside a handful of German top riders. While Wiesbaden was a German team selection show for pony, junior and young riders' in this past, these classes were dropped this year and replaced for the first time by international young horse classes.

There were two winners in the 5-year old division. Lena Waldmann and Gestut Bonhomme's Oldenburg gelding Go Twitter (by Grey Flanell x Sandro Song) won the preliminary test with 8.68 points, while Sönke Rothenberger aced the Finals test aboard the Danish warmblood Kjaerholm's Fendi (by Franklin) with 8.82 points. Dutch Bart Veeze and the KWPN licensed stallion Imposantos (by Wynton) were in charge of the 6-year old division (9.40 and 9.28 points), while Dorothee Schneider and Sissy Max-Theurer's Oldenburg mare Sisters Act von Rosencarree (by Sandro Hit) dominated the 7-year old classes with 78.529% and 82.857%.

In the freestyle tour Ingrid Klimke and the Hanoverian licensed stallion Franziskus (by Fidertanz x Alabaster) were unbeatable with 74.261% in the Grand Prix and 80.680% in the Kur to Music ridden in floodlight.

Related Links
Scores: 2019 CDI Wiesbaden
Werth Scores with New GP Rides, Quantaz and Fiero, at 2019 CDN Ankum
Dressage Next to the Castle: A Touch of CDI to the 2011 CDN Ludwigsburg
2018 CDI Kapellen Canceled