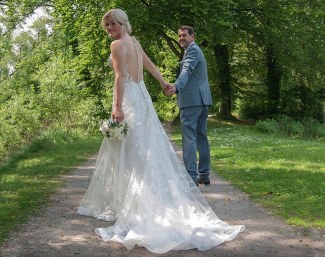 Swedish Grand Prix rider Malin Nilsson-Wahlkamp celebrated her wedding for a second time on 25 May 2019 with a church ceremony and big party. Nilsson married her long-time partner, German Steffen Wahlkamp, in a civil ceremony on Saturday 2 June 2018 but her church wedding was scheduled for a year later.

Colonel François de Beauregard has passed away on 27 May 2019. He was the head master "ecuyer en chef" at the Cadre Noir in Saumur from 1984 till 1991. He leaves behind his wife Martine and his children.

The 20-year old Austrian warmblood licensed stallion Puschkin (by Paquirri x Artos) passed away. Bred by Johanna Mayr, the bay stallion was the Austrian Young Horse Champion as a 5-year old. He went on to become the loyal mount of Austrian paralympian Thomas Haller and competed at the 2016 Rio Paralympics after which he retired from sport.  The stallion began breeding again after 2018 but his retirement lasted only two years. Puschkin sired Ernst Mayr's Exquisit EM who was reserve Austrian mare champion.  Hannes Mayr's Elysee (by Furst Romancier x Puschkin) was third at the 2018 Austrian mare championships. The Hungarian junior Anna Csiba competed Eljuscha (by Puschkin) at small tour level.

British Grand Prix rider and former national champion Michael Eilberg and his wife Maya Goldberg became first time parents at the beginning of June. The couple, which have been together for more than seven years, wed on 6 October 2018 in an intimate ceremony and announced that they were expecting in January. Maya delivered a healthy baby boy, named Joshua Ferdinand Eilberg. She is a dressage rider herself and most recently has been competing at national shows in Great Britain on Eilberg horses, such as Torino and Half Moon Delphi II.

Former Belgian Young Riders' team horse Sandiegobese (by Feliciano x Highline x Cocktail) has passed away. The 20-year old Dutch warmblood was one of Belgium's leading youth team horses under Tahnee Waelkens. He competed in the finals at the 2009, 2010, and 2011 European Junior/Young Riders Championships. In 2015 he sold as a schoolmaster to a British junior at the time, Brittany Dumbleton. Sandiegobese developed a hoof infection and despite help from vets and farriers the problem could not get cleared.

Prokoni.ru reported that the Russian owned KWPN stallion Goldfinch (by Jazz x Lingh x Ferro) has been sold to Andreas Helgstrand. The 8-year old stallion was competed by Russian Evgeny Sharangovich at the 2017 and 2018 World Young Horse Championships. The horse also competed in the PSG-Intermediaire I as a 7-year old in Russia. The horse was also the Russian Young Horse Champion and owned by Natalia Bronnikova.

Norwegian Grand Prix rider Antonia Jacobsen and Portuguese Grand Prix rider Nuno Palma e Santos got married in Borghorst, Germany, on 15 June 2019. The pair have been a couple for the past seven years and now exchanged vows. Nuno and Antonia manage a professional yard in Moorrege, Germany, together.

French Grand Prix rider Jean Philippe Siat had to say goodbye to his first Grand Prix horse, Greystoke. The Hanoverian gelding by Gluckspilz x Wenzel II was 24 years old. The pair competed at international Grand prix level in 2008 and 2009, their last show being the 2009 CDI-W Lipica where they finished third in the Kur. The horse was 14 at the time. The bay gelding also brought Siat a handful of French National champion's titles across the levels.

State stud Marbach has sold its 6-year old Baden Wurttemberger bred Lemercier as a sport horse to a regional show jumping rider. Bred by Gebhard Geiger, Lemercier is by Lemberger (by Locklsey II) out of First Lady (by Furst Heinrich x Latus II). He was a high scorer at the 2016 14-day Stallion Performance Testing in Adelheidsdorf.

French equestrian personality Michel Cochenet has passed away. He was well known as an eventing rider, winning team silver at the 1970 World Championships in Punchestown. He was closely involve with dressage through his wife Nadine Kersenti Cochenet and coached, for instance, dressage rider Marietta Almasy.