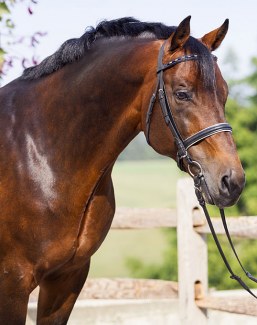 Sir’s impressive achievement was made possible by 74 point-earning sons and daughters, including 23 offspring competing at FEI, with six at Grand Prix. Rounding out the remarkable year for the Iron Spring stallions, UB40, Keur, finished third among nearly 800 ranked dressage sires in 2019.

Dee Clair was named Reserve National Grand Prix Champion at the US Festival of Champions with rider Anna Marek. The pair were also competitive in the CDI3* Grand Prix classes during the Adequan Global Dressage Festival, with scores as high as 71.6500%. Dee Clair is owned by Diane Morrison and was bred by Dr. Ruth Sorensen.

Caymus continued his successful FEI career with many wins at Intermediate II, including the GAIG/USDF Region 3 Championship. The bay gelding, bred and owned by Beth Godwin, also made his Grand Prix debut with rider Jodie Kelly. The pair earned a 70% in their inaugural Grand Prix class.

Bakara KS and owner/rider Elinor Armstrong Kennedy had an incredible year at Intermediate I, winning five classes, as well at the USDF Intermediate I AA Horse of the Year with a median score of 71.213%. Bakara KS was bred by Janice Kissel. Classy Sinclair and owner/rider Leif Aho had 13 top-six finishes in the CDI3* small tour classes during the Adequan Global Dressage Festival. The pair finished second in the Intermediate I Freestyle with a 74.458% during week seven, and won the Prix St. Georges during week ten. Classy Sinclair was bred by Lisa Grossi.

Contango, Preferent, and UB40’s offspring also had an incredible 2019. Contango finished the year ranked #2 USEF Sire of Dressage Horses, with 41 offspring earning points, including 7 showing at Grand Prix. International star Alcazar, ridden by Katherine Bateson-Chandler, was part of the bronze medal-winning USA team at CDIO Aachen. The pair finished 12th in the CDIO5* Grand Prix Freestyle with a 77.665%. They also represented the USA in two other European shows, with two top-seven finishes with scores in the 70s. Alcazar also had four first place finishes in the CDI3* and CDI4* classes at the 2019 Adequan Global Dressage Festival.

UB40’s sons and daughters did their father proud in 2019. They won three championships at the U.S. Dressage Finals, plus seven championships and reserve championships at the GAIG/USDF Regional Championships. Eye Candy, owned and ridden by Amy Gimbel, was Champion in both the Prix St. Georges AA and the Intermediate I AA at the U.S. Dressage Finals with scores above 71%. The pair also finished as champion in both of those divisions at the GAIG/USDF Region 8 Championships. Dalwhinney, owned and ridden by Hailey Guard, was Champion Fourth Level Freestyle with a 73.256% at the US Dressage Finals. The pair were also Reserve Champion USDF Horse of the Year in that same division. Among UB40’s 44 point earners, 11 competed at FEI, including two at Grand Prix.

A range of top Friesian and KWPN stallions are available to North American breeders as part of Iron Spring Farm’s four-decade commitment to the ISF Advantage. By providing proven bloodlines, along with exceptional service, transparency and impeccable veterinary care, the ISF team helps breeders achieve their sport horse goals. Ongoing expert advice and tools are also available so breeders can develop and market their offspring to the highest level. Iron Spring also offers a select number of talented Friesian and Dutch Warmblood prospects and broodmares for sale.