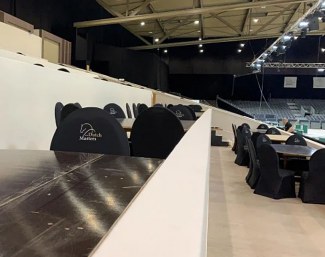 The organizers of the 2020 CDI-W 's Hertogenbosch, the final Western European League qualifier for the 2020 World Cup Finals, just announced that the event will be entirely closed to the public, but the show goes on!

Also the CDI Dortmund has limited their event their event to 1000 spectators. It took them until Wednesday 11 March 16.30h to finally announce their decision! ,

Den Bosch: From 1,000 Spectators to None

Yesterday the Security Region Brabant North in The Netherlands decided to cancel all events with more than 1000 visitors for the coming seven days in the province of North Brabant in an effort to contain the spreading of the Corona virus.

Den Bosch changed it format and would only allow up to 1000 spectators into their venue on a first come, first serve basis.

However today, the show organizers decided to close the event to the public.

"To avoid any discussion concerning the visitor numbers we have decided, in coordination with the Security Region, to have no public at all, although the Security Region’s advice was that a limited number of 1,000 visitors was allowed," said Den Bosch. "Everybody interested in the sport can watch the competition via live stream and TV."

As Den Bosch is the final Western European League World Cup qualifier, it is important that the competition takes place to determine the final tickets to Las Vegas.

"The sport takes central stage at The Dutch Masters and the competitions are of great importance to the riders with a qualification for the Rolex Grand Slam of Show Jumping and the FEI Dressage World Cup," said the Den Bosch press officer. "Since the first release we spoke to all involved: the riders, the sports federations and partners. They all support the sport and want the competitions to take place."

Escon Marketing, the organizers of the CDI Dortmund which also takes place this weekend, have struggled with their communication about a public being allowed at their event.

While the regional government in Northrhine Westfalia already decided on 9 March that events with more than 1,000 people would be forbidden as of 10 March 2020, the CDI Dortmund seems to have not made a decision.

On 10 March at 19h15 there was still no official decision by the organizers, when Eurodressage contacted their press office. Even today, there is nothing visibly posted on their official website, run by Escon Marketing, nor on the official website page of the CDI Dortmund, nor on Facebook. The only post made was this on 9 March.

However, Escon Marketing's Marcel Schrandt sent out memo on 10 March at 13:17 of the show's decision to close the the trade fair and not allow a public. We have failed to retrieve that memo online and are waiting to hear back from their press office.

Finally on Wednesday afternoon at around 16.30h the Westfallenhalle (venue) and the CDI Dortmund organizers released a statement on social media that Dortmund will take place in a changed format with only 1000 people allowed.

"Aside from riders, officials, accredited journalists, influencers and staff, only the VIP tables will be open," it read on their Facebook page. "Access is only open to seats 4 - 219"