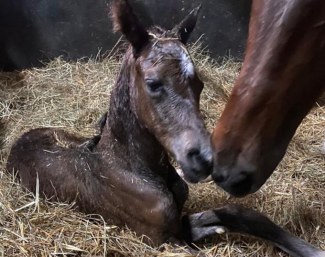 Dorothee and Forward Looking made their international Grand Prix debut at the CDI Bremen in February 2012 and competed at CDI's such as Aachen, Fritzens, Falsterbo, Stuttgart, Munich, Frankfurt, Hagen, Perl and Dortmund. Their career highlights include two first places at the 2012 CDI Fritzens and a win in the 4* Kur to Music at the 2014 CDIO Aachen. Their last show was the 4* CDI in Frankfurt in December 2014.

Forward Looking's retirement from sport was announced in October 2016. At the time the mare was already in foal to Villeneuve (by Vitalis x Dancier), but this pregnancy didn't come to full term.

"She unfortunately had twice, which she rejected in the 7/8th month," Schneider told Eurodressage.

"Forward Looking is now a super mom and she loves her new job very much. The little colt found his way to the milk bar at 2h30 and then Roisin, Kim, Sophia (grooms), Jobst (her husband) and I all went to sleep very happily," said Dorothee.

A post shared by Dorothee Schneider (@dorotheeschneiderofficial) on Apr 10, 2020 at 12:26pm PDT