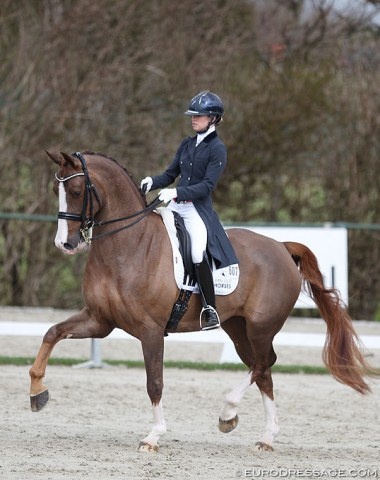 Severo Jurado Lopez and his former employer, Van Olst Horses in The Netherlands, have reconnected their ties since Severo has gone independent. Van Olst has given him the rising Grand Prix horse Fendi T to develop.

Severo Jurado Lopez worked at Van Olst horses in The Netherlands from 2011 till September 2013. Van Olst enabled the Spaniard to make his Grand Prix debut and to become short listed for the Spanish team in 2013. He then moved to Andreas Helgstrand, but after a year contemplated a return to Van Olst, but was convinced to stay in Denmark, which led to his biggest success so far, finishing fifth at the 2016 Olympic Games in Rio. As of 1 May 2020, Jurado Lopez has gone independent and runs his own business in Denmark.

This prompted Van Olst to reconnect with the Spaniard and give him a horse to develop and compete: Fendi T.

Fendi T is a 10-year old Dutch warmblood gelding by Negro out of Sursela (by Lester). He is bred by Timmers & Awater and owned by Gert-Jan van Olst.

The tall chestnut made his international show debut under Charlotte Fry at the 2017 CDIO Compiegne. In the summer of that year they represented the KWPN society at the World Young Horse Championships in Ermelo, where they were 11th in the consolation finals. In 2018 through 2019, Fry showed the gelding at small tour level at CDI's in Nieuw en St. Joosland, Compiegne, Lier and Kronenberg.

Fendi T has now been sent to Denmark, where Jurado Lopez will establish him at Grand Prix level and compete him.

"We have always kept a good contact with Severo," Anne van Olst told Eurodressage. "If Fendi gets sold or selected on the Spanish team (for the Tokyo Olympics), time will tell."

Charlotte Fry told Eurodressafe that, "I already have a lot of horses to ride and compete and my main focus is on Glamourdale, Everdale and Dark Legend at the moment, so it would be unfair on Fendi to keep him in the background when he has the talent to do big things. Severo and the Van Olsts have always had a good relationship and it’s great that we all can still work together."

The was licensed in 2014 for the Baden-Wurttemberger society and completed his 50-day performance testing in November in Schlieckau with a score of 8.39 points.

He began his show career as a 3-year old under Corinna Federkeil but Wanda Melani Tiemann took over in the middle of the 2015 show season. The pair became the reserve champions in the 3-year old stallion class at the 2015 Oldenburg Young Horse Championships in Rastede. The combination was selected as Oldenburg reserve pair for the 2015 Bundeschampionate.

In December 2016 Duvetico sold to Swedish Grand Prix rider Charlotte Haid-Bondergaard. He was trained by her husband, Danish Rasmus Bondergaard, at home.

Duvetico has now joined Severo's yard in Denmark. "Duvetico is slowly getting better, looking forward to share more of him with you," Severo posted.