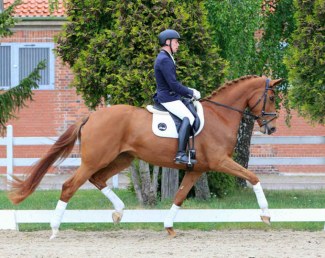 La Jolie became the best selling horse in the 2020 Verden Online Auction which concluded on 18 July 2020.

A collection of 57 out of 61 young sport horses were sold in this online auction. The average price for a horse was 16,605 euro.

La Jolie (by Libertad x Davignon) was owned by Gestut Gerkenhof, who discovered the mare as a filly. She sold for 53,400 euro to a new customer from North Rhine-Westphalia.

The 4-year old Don Horatio (by Delorean) fetched 42,000 euro and will stay in Germany.  The bay mare Louise (by Livaldon x Hofrat) moves to Switzerland for 35,000 euro.

The most expensive jumper was the 5-year old Descara (by Diancontinus x Escudo), who sold to Switzerland for 22,000 euro.

"During the ten-days of the training period in Verden, the horses were partly ridden on site and partly only inspected online – that is the phenomenon of online auctions," summarized Managing Director Wilken Treu. "For many customers, bidding from the comfort of their own home or on the road with a computer is very convenient. Over half of the horses (30) will leave Germany. Switzerland (six) and France (five) secured the largest contingents. Three auction horses will travel to Panama, two were auctioned off to Uzbekistan.