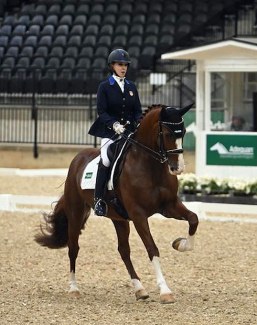 The new promotions are

This means that the current Para Dressage Pathway Lists look as following:

The Para Dressage Pathway program is designed to identify and assist athletes on their track to becoming medal contenders at the Paralympic and World Championship level. The pathway consists of three levels: emerging, developing, and elite.

“We are very proud of the continued progress in the Para Dressage athletes and horses,” said Assouline. “Another indicator that the program is working is that several additional riders are earning higher scores, breaking the magic 70% benchmark at a CPEDI3*, including Meghan Benge, Alanna Flax-Clark, Deborah Stanitski, and Cindy Screnci.”

USA Para Dressage thanks horse owners Barbara Bonk and Penny Neault for loaning horses and Katherine Pfaff of Cross Creek Farm for hosting athletes while training prior to competition.