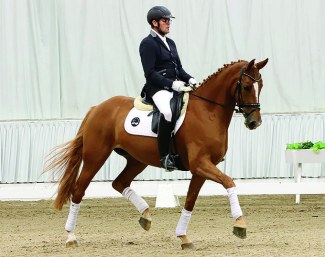 It was the last riding horse auction of the year in Verden. After ten days of training, 65 young talents achieved an average price of 16,254 euro in the 2020 Hanoverian Online November Auction. The Hanoverian premium candidate Danony was the best seller of the lot.

The daughter of Danone x Fürst Nymphenburg, Hann.Pr.A. Danony (breeder and exhibitor: Jochen Meyer), impressed with her enormous movements. The chestnut mare from the proven dam line of Norodina, which has already produced Heike Kemmer's former top horse, Borsalino, inspired eight interested parties to an exciting bidding duel. The last bid was 39,500 Euros, submitted by a buyer from Baden-Württemberg.

The most expensive jumper was Seppl (by Stakkato x Contendro). The 4-year-old dark bay, who goes back to the foundation mare Eckernförde II like the Hanoverian top sire Argentan, was worth 23,500 Euros to a buyer from Mexico.

A Norwegian client bought Gentleboy (by Gandhi x D'Olympic) for 20,000 euro. The 4-year old gelding Linus (by Londontime x Acord II) sold for the same amount to the U.S.A. A Finnish client paid 19,500 euro for Floriane (by For Romance x Florestan).

"The collection of the auction in November was smaller than in previous years. The proportion of foreign sales is to be seen positively under current conditions," said managing director and auction manager Wilken Treu. Almost half (31) of the horses will leave Germany. The greatest interest was shown in Finland with seven purchases, followed by France with six and Spain with four.

"It was a very difficult but also exciting auction year, which we managed with the help and trust of our breeders, exhibitors and customers," said Wilken Treu. "At the end of the year we still have a small surprise: On 11 - 12 December  we will offer a small, exquisite group of two and a half year old stallions".

These are young stallions that were admitted to the licensing in October, but withdrawn. They will now make their big appearance.