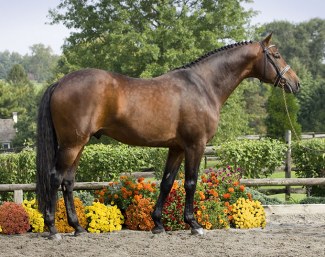 Sir Sinclair, Keur, is one of the most prolific sires of FEI dressage horses worldwide. He has been ranked the #1 USEF Dressage Sire for six consecutive years, 2015-2020, and landed in the top 50 WBFSH dressage sires for 2020.

Sir received the prestigious Keur predicate from the KWPN for his excellence as a sire, and has won the Get of Sire class six times at historic Dressage at Devon.

He is the sire of one approved stallion and two licensed sons, as well as numerous Star and Keur mares.

Sir Sinclair’s athletic ability was obvious at an early age. He began his career as an impressive young athlete, placing in the Top Ten in the prestigious PAVO Cup in the Netherlands before being imported to the United States.

He continued moving up the levels to Prix St. Georges and Developing Horse with scores as high as 72%. Sir successfully schooled and showed great talent for Grand Prix, but was unable to compete due to chronic Lyme disease.

Sir Sinclair’s sire, Lord Sinclair,  won his Stallion Performance test, the silver medal at the World Young Dressage Horse Championships in Verden, and the German Young Horse Championships in Warendorf with top scores. He was considered a top-level dressage stallion and competed through Prix St. Georges. This incredible dressage talent was passed on to his offspring, including more than 20 Approved sons.

Sir Sinclair’s dam, Krishna, is a Star, Sport, Preferent  and Prestatie mare. She is by Flemmingh, Preferent, the sire of Lingh and Krack C.