When No Amount of Success Is Enough: The Struggle With Self Esteem in the Horse World 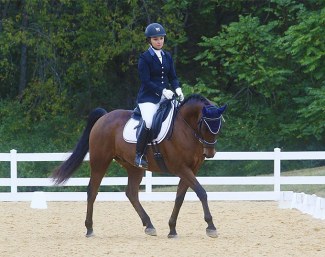 Horseback riding is one of the biggest blessings in my life. The ability to have a living, breathing teammate with a mind of its own is such a unique experience for an athlete. I am so grateful that day after day, my horse shows up to our rides and gives me her greatest effort. She deserves all of the credit for any success we have, whether it’s in the show ring or toward our personal goals at home.

But do I as a rider deserve any of the credit? How much do I contribute toward the equation of success? If you were to ask me these questions about any other horse and rider pair, I would attribute equal proportions of the given victory to each member of the team. But throughout my 20-year riding career, I’ve had trouble practicing what I preach and owning my equestrian successes. I’m quick to own failures and mistakes my horse and I make, but the flip side doesn’t come so naturally to me.

Within the past five or six years, I’ve converted from doing the local low-level hunters and equitation to the dressage ring. Any equestrian sport is difficult in its own right, but for me, dressage is exceedingly difficult. There are so many things to think about at once. Every tiny function of my body affects so many aspects of how my horse goes. In the first few years of my dressage show career, I was lucky enough to lease and show the wonderful Leviathan (“Sully”), a former one-star event horse. We started out in recognized shows at first level, where we received respectable scores in the upper 60s. But it’s just first level, I’d tell myself. There’s really not much pride in excelling at such a low level.

Critical of my Own Riding

Within a few months, Sully and I moved up to second level, which was wildly intimidating to me. Sweet Sully carted me around a few shows and helped me qualify for regionals like the saint he is. I was thrilled with him, but very critical of my own riding. My position wasn’t textbook; I wasn’t being as effective as I should; overall, I just wasn’t good enough, in my mind. I made excuses for my moderate successes, like when we were overall high score second level at a recognized show in the summer of 2016—there were only 5 total second level pairs at the show; that’s not that impressive an achievement.

After my lease on Sully ended, a friend afforded me the very generous offer to show her FEI horse to try for my third level scores and earn my USDF bronze medal. I was so excited to ride such a sophisticated, well-schooled horse like this. For Flacon (“Spanky”), third level was child’s play. We entered two shows at third level and received my final scores to earn my bronze medal. I always thought earning my bronze would feel like the ultimate success for me. I thought it would be so fulfilling and make me feel like a “real” dressage rider. But instead, I began thinking of myself as a “loophole bronze medalist:” someone who earned the scores on horses who could do the job in their sleep.

I didn’t feel like a “real” dressage rider or someone who really deserved the medal. I’d joke with barn friends that Sully and Spanky earned me my scores despite my riding, not because of it. I’d look back at pictures and videos from my time with each horse and tear apart my position and riding ability, marveling dubiously at how I’d received scores good enough to complete the bronze medal requirements. I didn’t feel I deserved or earned the success. In my mind, I was nowhere close to good or even adequate. I was mediocre at best.

Didn’t Feel Like I was a Good Enough Rider

During the summer of 2017, I moved to Philadelphia and started working in Center City. I still got to ride at home on the weekends, but mostly for fun at the lower levels. In the fall of 2019, I was afforded the unbelievable opportunity to acquire Dixie Rose, a Hanoverian mare with a show record through third level. She’d been sitting in the field for several years but was ready to get back to work. I jumped at the chance to own such a lovely horse.

But I’d be lying if I said I wasn’t intimidated at the prospect of partnering with such a nice mare. I honestly didn’t feel like I was a good enough rider to do her justice and feared in earnest that I would ruin her and her fine-tuned training. I knew that if we in any way failed, it was completely my fault.

But during the year I’ve had Dixie, we haven’t failed. We were high score adult amateur at all three regular recognized shows we attended and high score first level at two of those shows. We competed at BLM Championships in North Carolina and were sixth in a big championship class of mostly professionals. All season long, I chalked every success up to having a fancy, big-moving horse who already knew the job.

It was toward the end of the season, probably shortly before BLMs, that I began to consciously try to change my mindset. Going into the first level championships, I knew I’d be competing against mostly professionals on really fancy, likely young and up-and-coming horses. I’d competed at BLMs a few times before and knew the scores were tougher there. I set a goal of making the awards ceremony and just holding our own. And we did—we were in the top six in the class. Yes, I had a fancy, big-moving horse, but so did everyone else in the class. And we had pinned right there among them all. I had to give myself some credit that I had piloted Dixie to a good championship test.

Frequent Self-berating Ingrained in my Psyche

Since then, I’ve been reflecting on my mindset. Why is it so hard for me to accept my successes but so easy for me to accept my failures? Why does my self-deprecating attitude come so naturally to me? I think it largely stems from a historic insecurity in my ability as a rider.

In conversation with fellow riders, I often put myself down, though typically masked in jest. If I’m already pointing out my flaws, it doesn’t give others a chance to do so, which would hurt a whole lot more than me saying it about myself. At some point, my frequent self-berating became ingrained in my psyche, and I became my own worst enemy.

I am Worthy of Feeling Proud

Any good horseman knows to attribute success to his horse, but I think it’s easy to fall into attributing the entire success to the horse, especially for riders on more experienced horses. Yes, horses certainly deserve all our gratitude, and we owe so much of our success to them. But what I’ve come to realize is that riding takes two to tango, and the rider has to be some sort of proficient to achieve any degree of success. When we lose, I will take the full blame; my horse tries her hardest, and I probably wasn’t communicating clearly enough with her. But when we win, it’s on both of us—we both performed well.

No matter if it’s just first level, or there were only five in the division, a win is a win. Riding is about the partnership through the highs and the lows. I may still have a long way to go in my riding, but I have also come a long way. I may still have lots to learn, and I may still make rampant mistakes, but I am worthy of feeling proud of my accomplishments. I am working every day on convincing myself of this.