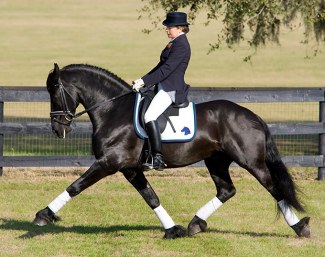 Meinse 439 had incredible success in the dressage ring with scores to 79% against all breeds. His agreeable disposition, willingness to work and exceptional dressage talent translated into many victorious rides. He earned more than 20 blue ribbons, high point awards and multiple championships, including two GAIG/USDF Regional Championships.

Meinse’s son, the Approved stallion Erryt 488, Sport, has competed successfully through the ZZ level in Europe. Erryt is recognized for his willingness to work and calm demeanor. Meinse has also sired several other stallions selected for the KFPS Stallion Show, as well as multiple Crown mares, and winners in the Netherlands. Daughter Elke won first place in the Three-Year-Old Mare class at the Central Keuring in 2012, and Freya van de Oostwal placed second in the Euro Friesian Cup that same year.

In 2021, Meinse’s daughter Reyna made her Third Level debut. This comes on the heels of her GAIG/USDF Region 3 Second Level Freestyle Championship in 2020.

Meinse’s son Zango ISF made his Training Level debut in 2020, earning High Score and winning his class with a 74+%. He was also the Champion Dressage IBOP at the 2019 FHANA Keuring in Pennsylvania.

Heinse was a winner through Fourth Level, including the GAIG/USDF Region 1 Championship. He was a three-time Dutch National Champion, and also recognized as a superior harness horse, earning two Dutch driving championships. He returned in his later years to the Netherlands to perform during the celebration of the 125th Anniversary of the KFPS. Meinse’s bloodlines through Heinse include the oldest Friesian motherline in the Netherlands, stam line 122.

Meinse also has impressive blood on his dam side: stam line 150. His dam Femke van Nes is a 1st Premie Star mare. She is a half-sister to the Model mare Hiltsje fan Nes, who is the mother of the approved stallion Dries 421.

Check out Meinse 439 when you’re ready for a dressage prospect with great gaits and a wonderful temperament.