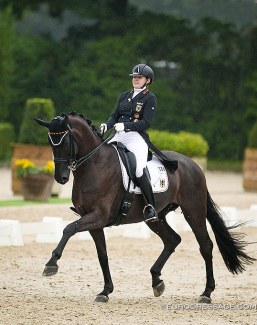 First Lady, a German Young Riders Team horse under Anna Abbelen and schoolmaster for Eileen Henglein, has passed away.

First Lady was a 15-year old Baden Wurttemberger bred mare by Florencio out of Sweet Dream (by Donnerhall). She was bred by Daniela Dolensky.

The black mare made her show debut in Germany as a 5-year old under professional Pieter van der Raadt. They competed in 2011 in the A and L-level dressage horse tests.

The pair was together for three competition years through 2013, when he had trained her up to Prix St Georges level.

First Lady sold to German junior rider Anna-Christina Abbelen in 2013, as a second iron in the fire alongside Anna's 2014 European Junior Champion Furst on Tour.

The new duo made its national show debut in Nettetal-Lobberich in August 2013 and its international junior riders' debut at the CDIO-PJYR Hagen "Future Champion" in June 2014.

After the sale of Furst on Tour to Hong Kong, Abbelen continued with First Lady and qualified her on the team for the 2017 European Young Riders Championships in Roosendaal, The Netherlands. The pair won team gold and double individual silver.

Their last show together was the 2017 German Young Riders Championships in Aachen two months later, where they placed fourth.

In the spring of 2018, First Lady sold as a junior riders' horse to German Eileen Henglein.

The brand new combination made its debut n June of that year at a local show in Herrieden. A week later they contested the regional show in Babenhausen, where they won two M-level classes.

Henglein and First Lady never made competed at a CDI but focused on national level competition. In 2019 they moved up the young riders' level and campaigned through the summer of 2020.

Their last start was in Munchberg in September 2020, where they finished second and third.

Unfortunately, First Lady passed away four weeks ago. She was in the equine clinic, where she sustained a fatal injury.

"Lady was in the equine clinic to get inseminated," Henglein told Eurodressage. " We wanted to have a foal out of her. Unfortunately the vets there were not able to lunge her there and she sustained a multifragmentary fracture. I still can't believe it. Lady was such a fun and unique horse."

"He's developing very well and later on we hopefully have Grand Prix in sight," Henglein added.