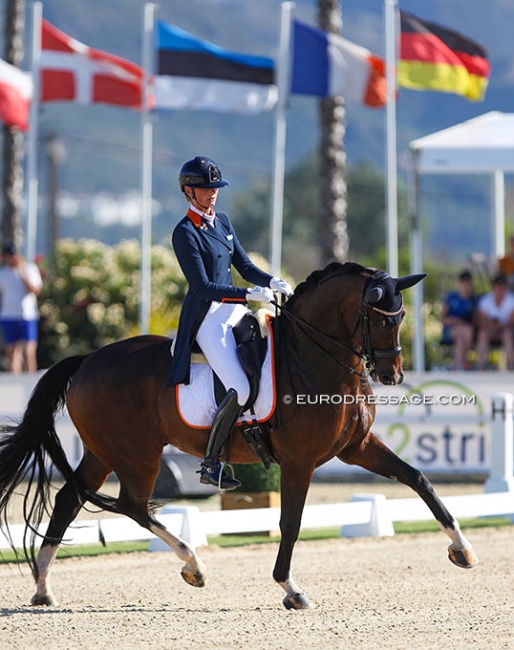 The Dutch dressage team has taken the overnight lead in the team championship competition at the 2021 European Young Riders Championships in Oliva Nova on Wednesday 7 July 2021.

Today an overcast sky reduced the sweltering heat that hit the Oliva Nova show grounds for the horse inspection on Tuesday. With a mild sea breeze and more acceptable temperatures of 28 - 30 C ° the first group of Young Riders battled it out in the team championship test for the team medals on Wednesday afternoon.

Rollercoaster of Eliminations and Off Course Conundrum

The competition turned out to be a roller coaster as no less than three combinations were eliminated after their horses showed irregular steps on the voltes and in the extended trots. The bell could have run for even more horses as the high temperatures, long travel to the south of Spain, as well as the atypical corona tainted show year took its toll on the fitness of the horses. One horse couldn't cope with the electric championship atmosphere and another long-haul horse made it by the skin of its teeth as the judge at C seemed to have held the bell in his hands but didn't ring it before the walk and canter tour.

Furthermore the competition took a thriller turn when the second rider of Team Germany - Elisabeth von Wulffen on Fiesta Bonita -  had major issues in the canter and went off course. The judges in fact needed to convene after the test to decide what to do with the scoring as two movements were not executed, a bell wasn't rung, and then the rider went off course by turning around and re-riding those movements. More on that later in the article.

Holland in the Lead

The Dutch dressage team ended up taking the overnight lead in the team competition after the first group of riders. Their high scorer of the day was team newcomer Milou Dees on the 11-year old KWPN gelding Francesco (by Florencio x Krack C).

The long-legged bay gelding is a ground covering mover and very pretty appearance, but his trot is highly developed and often becomes a bit passagey. The extended trots were ground covering and the half pass right was a highlight, but overall the horse was quite tense and tight in the back and topline and there needs to be more bending to the left in the corners and voltes. The extended walk had two hooves overstep, but the nose needed to come more out. The left canter half pirouette was very well ridden, the right one a bit over-collected with the horse losing the stride. The tempi changes were uphill and straight. The judges rewarded her 74.000% with individual scores ranging from 73.382% to 75.294%.

The second score contributing to The Netherlands' provisional first place in the team ranking was Quity Vossers' 70.441%. The return team duo placed third provisionally. Vossers and her 9-year old KWPN gelding Hummer (by Charmeur x Daddy Cool) started off on the wrong foot with the horse resisting and reversing in the halt at entry. In the trot work on the left lead the horse was unsteady in the contact, often bopping its head. The turns on the haunches in walk were small and the extended walk had very good overtrack, but Vossers almost had her hands open and close to her knees to make the neck go down instead of the horse relaxing and stretching automatically in the contact with the rider's hands on the withers. The left canter half pass was counter bent towards the end, but the left canter pirouette was very well prepared, yet the right one big. After quite a few small issues at the start of the test, Vossers ended strongly with wonderful tempi changes and an uphill extended canter. The score was 70.441% but the judges were understandably quite divided, with marks going from 68.676% to 70% from the four judges and the Austrian judge as high score at 72.059%.

The pair had a very good cadence in the trot, a super flow in the lateral movements and achieved good overtrack in the extended walk, even though the mare could have dropped a bit more in the poll. The walk before the turns on the haunches got risky in the rhythm and in the left canter half pass the collection was lost, but the tempi changes were straight and super well ridden and the final extended canter was uphill. They scored 72.647% for a second place, provisionally. Schmits-Morkramer's marks ranged from 71.765% to 74.412%.

Germany's second rider, Elisabeth von Wulffen and the 11-year old Oldenburg mare Fiesta Bonita (by For Compliment x Rubinstein) had a not so dreamed of debut ride on the German Championship team. The pair had shown excellent form at the German team selection trial in Hagen and half way into their team test were standing at 76% until the canter came. The trot work was rhythmical and flowing in the lateral movements, with nice extensions. In the shoulder in right they left the track though. The collected walk got slightly short-long before they turned onto the diagonal, but the extended walk had good overtrack even though the dark bay mare could have marched more.

And then the canter came. The mare needed to poop and the flying change at X after the left half pass just didn't happen, which took the pair straight on the diagonal and with no room left to execute the canter half pass right. So instead, von Wulffen stayed focused (yet looked visibly shaken), turned around and canters back to the corner near F to re-ride the left canter half pass (starting at P this time) to redo the flying change at X and the canter half pass right. At no point was the bell rung though. Von Wulffen continued her ride, still produced fairly decent pirouettes although the change at C was short, but then there were short changes to the right in the four tempi and a mistake in the three tempi.

After she finished her test, the judges convened at C to talk about the mistake. In principle the bell needed to have been rung as von Wulffen went off course and in the end, a -2% was correctly deducted from her total score. They still ended up scoring 66.530% despite the string of mistakes.

Von Wulffen and Fiesta Bonita are an exciting duo to watch and they will certainly have a new try to reach their normal level of performance in the individual test.

The Swedish team currently stands in third place with a score average of 68.353% after two riders went.

The highest scoring Swede on day 1 was Ellen Linden Urnes on the 14-year old Westfalian stallion Fairy Tale (by Friedensritter x Rosenkavalier). The powerful chestnut has developed much over the past two years, gaining a ton of muscle and rider Linden Urnes has now really gelled with her horse. The horse has much spring and power in trot, but could still stay a bit more consistently up in the frame. The extended walk was good, the left pirouette very nice and the tempi changes well executed. They were rewarded with a 68.765% which ranked them sixth.

Cecilia Bergakra and the 12-year old Swedish warmblood Izack (by Zack x Donnerfly) followed not so far behind them with 67.941% and a provisional 9th place.

The fourth placed rider in group one was the Danish born Belgian Karoline Sofie Vestergaard on the 12-year old Belgian warmblood gelding Junior Hit (by Sandro Hit x Calvani). The combination is seasoned at Young Riders level and has been scoring very consistently over the years but is waiting to be recognized and rewarded at the big Championships. For any rider with a saddle pad without the flag from Germany, Holland or Denmark the fight to get points seems twice as hard.  Vestergaard and Junior Hit had a very nice flow in the trot, although the first extension was a bit conservative. The right traversal movements in trot were very well executed and the collected walk had a good clear rhythm. Also the canter was very solid with straight tempi changes. With the judges' finger stuck on the 6.5 and 7 score button of the keypad, the score got stuck at 69.118% with marks going from 67.500% to 70.294%.

Denmark's best score of the day was given to Sofie Hansen and the 12-year old Hanoverian Dieu d'Amour (by Dimaggio x Rotspon) who got a generous 68.912%.  Her scores went from 66.471% from the Dutch judge and up to 70.588% from the Danish judge. Dieu d'Amour did not have his best day. The trot extensions were overpaced, the horse often dropped in the poll and was unsteady in the contact and the collected walk was not elastic in the back, resulting in prancy steps. However, the extended walk had much overstep (although the horse was restless with his head and wanted to scratch its mouth) and the left pirouette was much better than the right one. Overall today in canter Dieu d'Amour did not show the desired level of self carriage. Hansen piloted the horse through the test instead of the horse taking his rider on a joyride. They will get a second chance to score higher in the individual test.

The last rider to go of the day was Spain's Julia Alvarez Abad on the 17-year old Hanoverian Du Pre (by Don Frederico). Trained by Spanish Olympian Beatrice Ferrer-Salat and co-coached by Mexican Olympian Bernadette Pujals, Alvarez has a power team backing her up. The chestnut gelding has a very elegant light footed trot with much scope and freedom in the shoulder. On the right lead in trot, the horse got behind the vertical though. The walk pirouettes were well executed. In the extended walk the nose could have come more out. In canter the pirouettes showed good collection and the tempi changes were straight, but overall the contact needs to be lighter. They scored 68.765% to land a provisional sixth place.

The first rider to go today was French Alexandre Cheret aboard the 13-year KWPN gelding Doruto (by Quattro B x Zortin). The pair scored strongly with its canter work - the flying changes and extended canter - and landed eight place with 68.029%.

The top 10 was completed by Swiss Cosima Lehr on the 10-year old Westfalian mare Donna Mey (by Deveraux x Florestan) The Frankfurt (GER) based rider is only in her first year at international Young Riders level and only switched to the Swiss nationality in April 2021 after she was deemed "not ready" for the German regional squad in Hessia. Trained by Christian de Bruijn, she made her CDI debut in Grote Brogel, Belgium, in May and after competing in Hagen in June was nominated on the Swiss team. They scored 67.706% today in the team test and standing 10th so far.