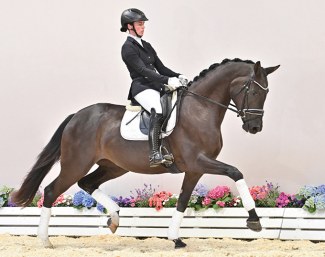 After a six-hour auction marathon, around two and a half million euros were in the wallets of Oldenburg breeders. Oldenburg friends from all over the world secured their Oldenburg star at the 95th Autumn Elite Auction at the Oldenburg Horse Centre in Vechta.

The noble black mare Superb danced at the top of the price list. The 3-year-old Superb (by Secret - Welt Hit II - Landadel) is bred by Lambertus Schnieder from Molbergen and exhibited by Stevens Sportpferde from Molbergen/Lower Saxony. The beautiful black mare sold for 450,500 euro to a regular Oldenburg customer and successful first-class breeder in Germany.

Superb is sister to Grand Prix star Famoso OLD (by Farewell III/Benjamin Werndl) and the licensed Schickerio (by Stedinger).

The 4-year-old Commisario (by Comme il faut - Diamant de Semilly - Nekton), bred by Hans-Jürgen Poehls, was the second top price and most expensive jumping horse. Exhibitor b-Horses from Eckernförde discovered Commisario as a foal in Vechta. He now sold for 105,000 euro to Lutz Gössing, patron of the international show jumping stable of Tim Rieskamp-Gödeking.

A group of 15 horses out of a collection of 39 sold abroad.

The top price among the elite foals was 62,000 euro for the charming Sempre libre (by So Perfect - Fürst Romancier - L'Espoir), presented by Brigitte Griesser from Austria. He sold to new customers in Great Britain. Sempre libre is out of the first crop of the Sezuan son So Perfect, who was the reserve champion of the Oldenburg licensing in 2019.

The top price in the jumping foals with 33,000 euro for Connery (by Conthalou - Cornet Obolensky - Casall), bred by Rudolf Kühlmann. Connery will move to the stable of regular customers in Sweden.