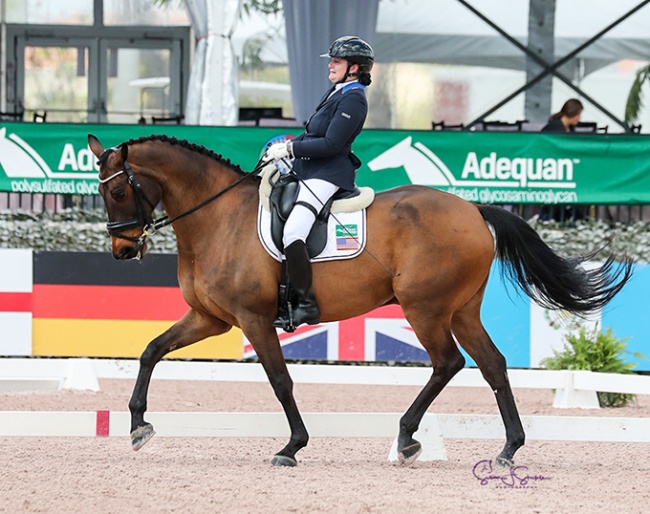 While U.S. Para Dressage team rider Beatrice De Lavalette has competed in national shows since her Paralympic debut in Tokyo last August, her Paralympic mount Clarc made his first reappearance in the show ring this week in the CPEDI3* FEI Para Team Test Grade II. The return was a winning one for De Lavalette and Clarc, a 15-year-old KWPN gelding by Dreamcatcher x Lord Sinclair I, as they earned an overall percentage of 72.848%.

De Lavalette and Clarc, owned by Elizabeth De Lavalette and Nicolas De Lavalette, had only been matched up since October 2020 when they made their nine-month run toward the Paralympic Games. That intense time together and their experience at the Games made for a strong partnership, and they’ve learned a lot from each other.

“I was lucky enough to open the entire competition [in Tokyo], because I was first to go. That was stress added to more stress,” recalled De Lavalette. “Both days [of competition] were great, and we learned a lot in those two days.”

She continued, “Now he’s just a love bug. He’s so sweet. He’s so willing to work and to learn, and he’s just such a good boy. I couldn’t be more proud of him.”

That connection was on full display as judges Carlos Lopes (POR) at E, Adrienne Pot (USA) at C, and Anne Prain (FRA) at M unanimously put De Lavalette and Clarc on top. For De Lavalette, it was the leg yields that were the most impressive part of their test.

“He was feeling really good,” said De Lavalette. “His leg yields were perfect. He’s really good about moving laterally since I work with him on that a lot at home.”

Now that they’ve represented the United States on the biggest stage, De Lavalette appreciates the opportunity to continue to be selected for teams.

“It was already an honor to represent the U.S. as an individual rider at the Paralympics. It’s so big, so you really feel the importance of representing your country. To be able to continue to do that is awesome. It’s such a great feeling,” she expressed.

After an exciting day of team competition, De Lavalette had one more thing to add, “Go USA!”

Schloss in the Blue

In the CPEDI3* Para Team Test Grade I class, Jody Schloss (CAN) rode her own Lieutenant Lobin to a personal best 70.953%. Lieutenant Lobin, an 18-year-old Dutch Warmblood gelding by Lobster x Fanal Prydsholm, received consistent marks throughout the test and finished on a strong note, receiving some of their best scores down the final centerline. The emotion was palpable from Schloss, who stood from her power-chair to honor her country’s flag during the awards presentation.

Schloss and “Lobin,” who she affectionately calls “Lobylu,” first paired up in 2015. Schloss admired his big, beautiful walk gait, but it took them some time to fully come together.

“Lobin had to learn to be a para horse and to take care of me. At first he was a bit spooky, but he quickly learned that that was not appropriate behavior,” explained Schloss. “I fell in love with him almost immediately because he has a definite fun-loving personality. He loves to cuddle, and he always makes me laugh with his funny faces when he reacts to something!”

Today’s result was particularly exciting for Schloss, because she has been doing eye therapy to improve her perception of where she is. Additionally, she also got a new saddle for Lobin, which had him moving more freely today throughout the test.

“He was much more responsive today to my aids. Before the eye therapy, I was always to the left of the centerline. Today, I actually got an eight on the centerline from the judge at C,” enthused Schloss. “It felt amazing to earn a personal best today! It meant that all of our hard work is paying off, and the time and money I’m spending on eye therapy is worth it. I’m so proud of my Lobylu.”

Sydney Collier (USA) piloted All in One, owned by Going for Gold LLC and Katie Robicheaux, to a second-place finish. The 13-year-old Hanoverian gelding by Abanos x Dauphin received an overall score of 67.976%.

Shoemaker in the Winner's Circle

In the CPEDI3* FEI Para Team Test Grade IV, U.S. Paralympic team bronze medalist Kate Shoemaker and Solitaer 40 continued to demonstrate their dominance. Shoemaker and the 15-year-old Hanoverian stallion by Sandro Hit x De Niro owned by Kate, Craig, and Deena Shoemaker scored numerous eights from all three judges across the entirety of their test to earn an overall percentage of 74.208%.

Rodolpho Riskalla (BRA) flew in from Germany to steer Evi Strasser's Rigaudon Tyme to a 69.417% with highlights in the collected trot and canter. Genevieve Rohner (USA) and Phoenix Gwyngalet came in third scoring 58.042%.

Cynthia Screnci (USA) rode Sir Chipoli to 65.272% in the CPEDI3* FEI Para Team Test Grade V. Screnci and the 15-year-old KWPN gelding by Sir Donnerhall I x Carabas she owns with Volado Farms were consistent throughout their test, particularly in the canter work.

Charlotte Merle-Smith (USA) topped the CPEDI3* FEI Para Team Test Grade III test aboard hers and Susan Merle-Smith’s Guata, an 11-year-old KWPN mare by Vivaldi x Haarlem. Their test got better and better as they went, ultimately earning a nine and two eights in the final halt from the judging panel for an overall percentage of 69.559%.

Along with national competition, CPEDI3* classes continue on March 12 with CPEDI3* FEI Para Individual Championship classes as the week builds toward the freestyle classes on Sunday, March 13.