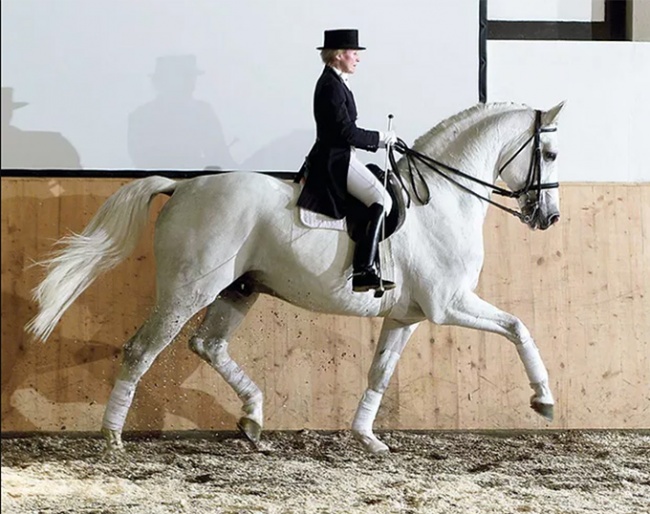 Ramiro's Bube, the licensed Hanoverian Grand Prix stallion owned by Christine Stuckelberger, has passed away. He was 32 years old.

Ramiro's Bube was born in 1990 and was by Ramiro out of Pikdame (by Pik Bube x Moltke x Farnese). He was bred by Friedrich-Wilhelm Maack.

The grey was licensed for breeding at the 1992 Hanoverian Stallion Licensing in Verden and later on approved for Brandenburg, Rhineland, and Oldenburg.

He sold at the Hanoverian Auction in Verden for 600,000 Deutsch Marks at the time, a huge amount of money.

Although never really the popular breeding stallion in Germany, Ramiro's Bube sired no licensed sons, but has 60 daughters registered as broodmare. Three of them were state premium.

He had 114 offspring registered for sport in Germany, one of them competed at S-level in dressage and 13 in show jumping. His most successful descendants are dressage mare Ramiro's show jumpers Ramino (Miriam Michelberger) and Ritano (Bernd Rubarth). As a dam sire, Ramiro's Bube was known for the Danish Paralympic team horse Horsebo Smarties (by Gribaldi x Ramiro's Bube).

Ramiro's Bube was first competed in Germany as a 3-year old by Bernhard Fischer, before Hans Peter Mohr took on the ride.

Mohr rode the stallion in the riding horse tests, while Thomas Schönig initially jumped him as a 4-year old. Mohr last showed him in 1995.

New Chapter in the Alps

In 1996 Ramiro's Bube began a new chapter in his life, having sold to the Swiss Christine Stuckelberger. The stallion was named champion of the 1996 Swiss Warmblood stallion licensing Avenches.

Stuckelberger competed him as of 1997 at M-level and at Prix St Georges level in 1998 and 1999.  In 2000 French Sebastien Poirier took on the ride  and competed him at a few national shows in Switzerland and the CDI Ebreichsdorf.

In 2001, Swiss Francoise Cantamessa competed him at, for instance, the Zwolle International Stallion Show, but Stuckelberger rode him at the CDI Arnheim.

In 2002 the stallion returned to Germany for one year to be based with Hans Rüben in Wurselen, where Silke Fütterer-Sommer trained him. She rode him at regional shows in Nettetal, Cologne, and Wickrath.

In 2003 he sold to Fritz Gaulhofer and moved to Austria. Fritz tried to qualify the stallion for the Austrian team for the 2004 Olympics in Athens and competed him at a few CDI's that year. In 2005 he was shown by Stefan Peter.

In 2009 he was licensed for the Austrian warmblood society.

Ramiro's Bube was retired from riding in 2010 and returned to Christine Stuckelberger's yard Hasenberg in Switzerland.

"He came into our barn as a 4-year old (sic, it was in 1996)," Christine Stuckelberger wrote on her Facebook page. "He had different riders who presented him. As a breeding stallion he was very successful. It's a pity that very few good riders got to train his offspring. His last 12 years he spent as a happy and spoilt pensioner. Saying goodbye to him was very, very difficult."