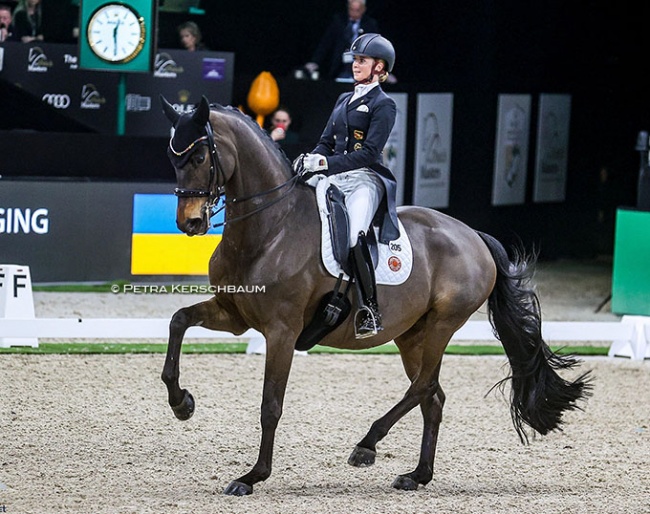 Olympic and European Champion Jessica von Bredow-Werndl made a winning come back to the international stage in the Grand Prix at the World Cup qualifier CDI-W in Lyon (FRA) on 27 October 2022.

The reigning champion has not lost any of its sparkle after her baby break, but for World Championship bronze medal winner Dinja van Liere (NED) Lyon was a disappointment as he had to withdraw her top ride Hermes after he turned up lame in the warm-up.

Back to the Eighties

Two Scandinavian riders were following the German dup with Patrik Kittel on the 10-year old Swedish bred Touchdown (by Quaterback x Sack) in third place on 75.261%.

Danish Nanna Merrald Rasmussen had Agnete Kirk Thinggaard's Oldenburg mare Atterupgaards Orthilia (by Gribaldi x Donnerschlag) back on call since the 2022 CDIO Aachen in July. The 17-year old mare posted 74.369% for fourth place. Her marks ranged from 71.196% to 75.978%, with the low and high score coming both from the judges on the long side of the arena.

German Isabell Werth rode Madeleine Winter-Schulze's 16-year old Westfalian gelding Emilio (by Ehrenpreis x Cacir AA) into the top five with 73.413%. The panel was also quite divided on this test with a 69.565% from French judge Judet and a 75.870% from German judge Wust.

"Hermens went super well yesterday evening," said Dutch team trainer Alex van Silfhout. "This morning in the warm-up he was totally lame. We suspect a hoof abscess. It almost can't be anything else."