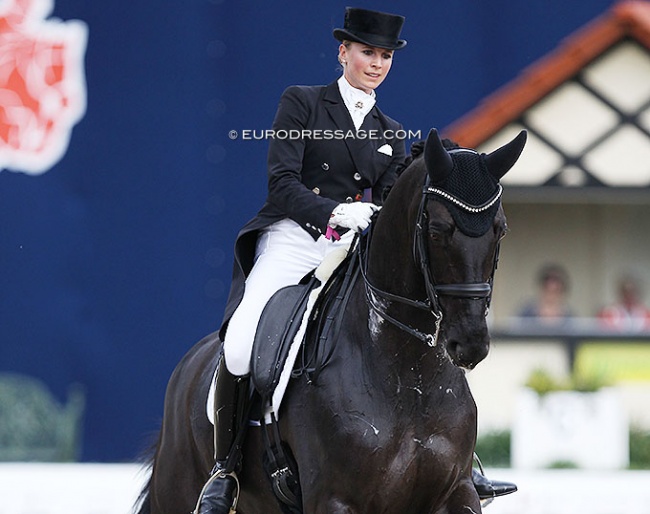 Sir Max is a 2011 born Hanoverian gelding by  by St. Moritz Junior out of Deliness (by Del Piero x Weltmeyer x Lemon xx). He is bred by Tanja Finck.

The bay gelding was first competed as a 4-year old by Marc-Oliver Blessing. In 2016 Kristina Olson took over.

In 2017 it was Alexandra Sessler who took him to developing Prix St Georges.  Sir Max competed at the 2018 World Young Horse Championships in Ermelo, The Netherlands, where he finished 8th in the 7-year old Finals.

Sir Max moved to Werndl's Aubenhausen yard in September 2018 and became co-owned by the Werndls in partnership with Tim Koch.

Jessica has competed him at small tour level in 2018 in in Stadl Paura, Ebreichsdorf, Hagen, Munich, Kirchstockach and Ising. The last three classes she won in a row.

The pair made its international show debut at the CDI Ebreichsdorf in April 2019 and placed second and third. It was the horse's only CDI under Jessica. They also competed in the Nurnberger Burgpokal qualifier in Hagen (7th) as well as at a couple of summer shows.

In November 2019 the gelding had a small accident when he slipped and fell. Sir Max did not show for little over a year, making a come back to the arena in Stadl Paura in February 2021. In May 2021 he did his first Intermediaire II under Jessica. Their last show together was in September 2021 in Ising.

In October 2022 the FEI passport of Sir Max was changed, listing Aubenhausen as owner of the horse.

Sir Max is the second horse the Sohler family got from Aubenhausen. Two years ago they sourced the Danish warmblood Askehavens Beau Sancey (by Don Olymbrio x Sandro Hit) there and he has been Marie's junior level ride in 2022 alongside Dwayne (by Diamond Hit x Weltmeyer) and Antilliano (by San Silviano x Herzensdieb).

"I am riding in Aubenhausen since two and a half years my four horses," Sohler told Eurodressage. "We took over Sir Max from Jessica and she is training me frequently on him."

Sohler and Sir Max made their national show debut at Gut Ising on 5 November 2022.  Last weekend the pair rode its second show in Kreuth/Rieden, where they placed first and seventh. She is coached on Beau Sancey by Amelie von Harsdorf, on Sir Max by Jessica.