Friedolin Sold to Australia, to Stay in Training with Beresford 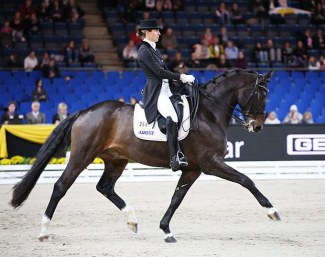 Australian FEI rider Stephanie McDonald has acquired the rising Grand Prix horse Friedolin in Germany and will keep it in training with Hayley Beresford.

Friedolin is a 10-year old Oldenburg gelding by Fidertanz out of Widona (by De Niro x Plaisir d'Amour).

He is bred by Georg Bischoff and was owned by Friedhelm Henning and Sabine Klenk.

Friedolin has been trained from young horse level to developing Grand Prix by Klenk.

The pair made its show debut in Ludwigsburg in June 2013 when the horse was 4. In 2014 they competed at the Bundeschampionate and were 28th in the consolation finals. In 2016 they moved to small tour level, in 2018 to medium tour. This year Friedolin was shown in several medium tour and developing GP horse tests in Zeutern, Ludwigsburg, and Babenhausen.

Friedolin has now been sold to the Melbourne based McDonald as her future Grand Prix ride, but the horse will stay in Germany for more training with Australian Hayley Beresford.

"He has done a year of young horse Grand Prix and will soon step up for a big Grand Prix," Hayley told Eurodressage. "He's a super correct and beautifully trained horse."

The 30-year old McDonald has competed at one international show so far. Aboard Che de Jeu (by Voice x Jazz)she rode at the 2017 CDI Boneo.