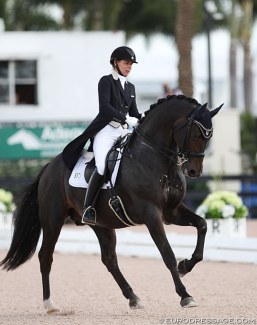 The rising 11-year old Eclectisch is KWPN registered stallion by Zenon x Olivi x Visioen. He is bred by the Andeweg family  in The Netherlands.

From Holland to Denmark to Sweden to Germany

He was approved 2012 AES Stallion Licensing, where Andreas Helgstrand bought him. He finished sixth at the 2013 Danish Young Horse Championships.

Eclectisch did not compete at any big show in 2017 and at the end of the year sold to American billionaires Leslie and Richard Malone of Harmony Sport Horses.

The horse moved to Susan Pape's yard in Hemmoor, Germany.

In 2018 and 2019 Susan competed Eclectisch in the international medium tour in Wellington.

The talented pair has now made its international Grand Prix debut at the first show of the 2020 season in Wellington. They were second in the Grand Prix with 70.435% and second in the Special with 69.936%.

“What a great start on the occasion of the first week of the tournament in Wellington, Florida! My expectations were far exceeded,” said Susan on Facebook. "Eclectisch did his first international Grand Prix and Grand Prix Special and finished second behind the American Squad Rider Steffen Peters, twice. I didn't lose victory but won second place! If I hadn't messed up the ones in the Special, there would have been more points in it."

Susan trained and competed the black up to Grand Prix level. They made their international small tour debut in 2015 and their Grand Prix debut in 2017.

In 2018 Don Nobless did only one CDI in Florida at the beginning of January. He returned to the international ring a year later in February 2019, also in Wellington, for one show. Two months later he competed at the CDI Hagen in April, followed by the CDI Hamburg in June with ever increasing scores.

Hamburg was the duo's last show together, which ruled them out for British team selection for the 2019 European Championships. Don Nobless is yet to make his show come back.

Joining Susan on her 2020 Wellington stint is also the 9-year old Westfalian Bourani (by Belissimo M x Davignon) which her husband Ingo Pape owns together with Harmony Sporthorses. The chestnut gelding is bred by Mathieu Beckmann.

Susan and Bourani made their CDI debut in Wellington last year at small tour level and did two CDI's. This year, they won their first class of the 2020 season - the Prix St Georges - with 73.147%. In the Intermediaire I they were third with 70.794%.