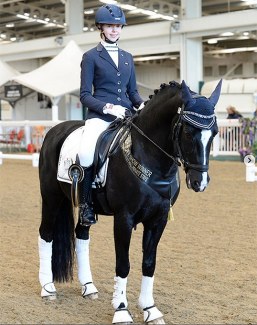 British Dressage has published the names of the combinations which have been submitted to the British U21 International Pathway 2022 squad list at the start of the year.

Under 21 Performance Manager Caroline Bell and the selectors have released their plans for the forthcoming international championship teams campaigns for 2022 as our squad build towards their FEI Championships this summer.

The preliminary U21 International Pathway 2022 squad list has been announced following key shows at the end of 2021 and these combinations are those who have met the score criteria to compete internationally and, in the Selectors’ professional opinion, have clear form or the potential to be considered for team selection for the current competition season, or in their current age category for future Championships.

Combinations listed will be expected to maintain form and fitness to remain part of the squad and other combinations may be added subject to Spring competition performances. The Selectors’ next review of the Squad list will be 20 March 2022.

The 2022 campaign starts with an un-mounted day for the squad at Onley Grounds in Warwickshire for a day themed “You – the elite athlete’. It will be the first chance for athletes to catch up with Caroline Bell on the 2022 selection policies, competition planning including COVID restrictions, CleanSport and rule changes.