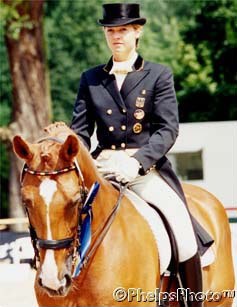 In 1996 Nadine was already winner in the junior riders division.

Chef d'Equipe Holger Schmezer was very enthusiastic about this combination: "Robinson showed great extensions, but his flying changes still need to improve." Last year Maiwurm was ranked 5th at the European Young Riders' Championships, and this year her medal chances will definitely increase.

New comer Christine von Oldershausen placed second with the Holsteiner Amica Farina (by Ahorn Z). Third place was covered by the 1998 Reserve European YR Champion Astrid Buer with the Hanoverian What Joy (by World Cup I). "Of the 25 participants at the Warendorf show, half of them scored above 65%; 1999 will show that the German Young Riders are the Best of the Best," Schmezer commented.