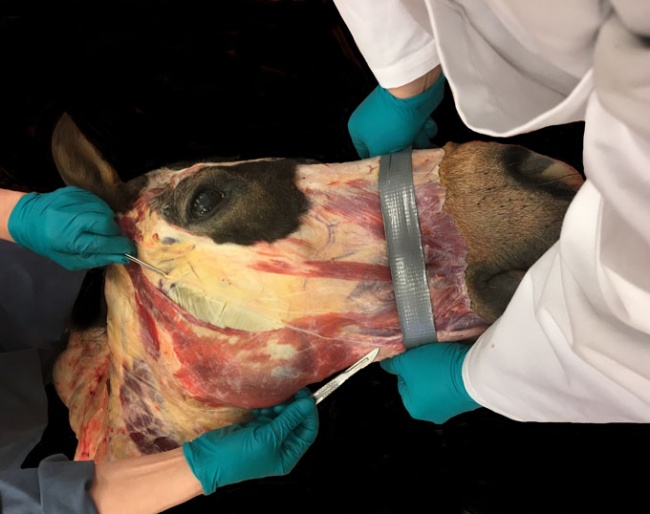 The fifth International Fascia Research Congress was recently held in Berlin, Germany from 14-15th November 2018. The congress covered various lectures and practical demonstrations in both human and veterinary scientific research and rehabilitation field.

Among the topics covered during the congress, one seemed of particular interest for those riders who include a noseband in their training. Called “Effect of noseband positioning to the fascial and neural dynamics of the head” this lecture was presented during the veterinary aspects part of the Fascia Congress on Wednesday 14th November.

The study examined the effects of nosebands on the facial nerves and fascia of the horse's head and introduced new information about the effects of pressure and positioning of the noseband. It was lead by two Finnish physiotherapists, Tuulia Luomala and Mika Pihlman, in co-operation with Rikke M. Schultz (DVM, RMS Equine Practice, Denmark) and Vibeke S. Elbrond (DVM, Ass. Prof. Anatomy, Faculty of Health & Medical Sciences, University of Copenhagen, Denmark).

During this study pressure was directed tightly over an equine cadaver head. The scientists used the three different positions on the horse's head that are commonly used for different noseband fits, such as the dropped noseband, the flash or the dressage cavesson in double-bridles to see their effects on facial nerves and surrounding fascia. Thereby it is paramount to know that the horse's facial nerve is divided into dorsal and ventral buccal branches. These nerves branches are running along a zygomatic arch and connect to the fascial layers of the masseter muscle.

The pressure applied by the nosebands limited the movement of the nerve and the elasticity of surrounding fascia layer when directed above, below or relatively far from the nerve trunk. The low positioning (1) like with a drop noseband seemed to have the most restricting effect if tightened as it then restricts the gliding function of fascia and can press nerves even directly. This positioning is typically seen used on young horses wearing drop or flash nosebands. The high positioning (3) which more recently can be observed regularly with modern wide cavessons in double-bridles then touching the cheekbone also created movement dysfunction of both fascia and the nerve and according discomfort. Regular positioning (2) typical for simple cavesson fit seemed to have the least effect on the facial nerve and the fascia.

The study also brought to light that tension on the muscle masseter and the ear region affected the fascial and neural dynamics of the head. Therefore, brow bands also have an important role on the neural dynamics and should be long enough as the neural system has several components, and any tension coming from the fascial system can affect the nerves on many levels.

Therefore the whole bridle should be fitted correctly and individually, ensuring a loose enough noseband and brow band fit that doesn´t create pressure on the head. A low noseband fit combined with pressure seemed to create most significate dysfunction on the fascial and neural system.