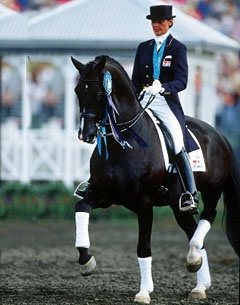 It is going to happen May 31 - June 2: Olympic Ferro will make his comeback at Grand Prix during Dressage at Nijmegen. His performance at Olympic Games in Sydney during October of 2000

had been the last for the well known stallion belonging to Mrs Lamers and Van de Goor.

Thereafter the stallion remained absent because of a stubborn injury. But, even though many had written him off as a dressage horse, his rider Coby van Baalen always believed that Olympic Ferro would return to the competition arena.

Coby van Baalen spared neither cost nor effort to bring the stallion back and to bring him back to his former level. She assigned Ferro his own groom so that he would look perfect at the breeding station and so that he would not lose all his conditioning and muscling. These efforts were ultimately rewarded.

Coby van Baalen: "I really wanted to keep this secret as long as possible because the pressure on the return of Ferro is so enormous and because I will only believe in his return when we walk into the ring sound. But soon the entries for this national competition will be known anyway. Right now I can hardly believe it myself, but of course I’m happy. How happy remains to be seen on June 2."