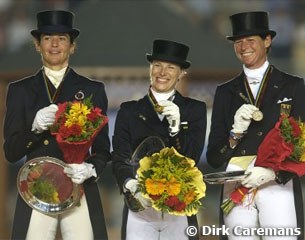 The dressage phase at the 2002 World Equestrian Games in Jerez de la Frontera, Spain, came to a conclusion with Nadine Capellmann being named and judged the new World Champion.

Aboard her Westfalian gelding Farbenfroh (by Freudentanzer), she rode an 83.675% freestyle which ranked her third in the kur but due to her accumulated marks in the Grand Prix and Special, she claimed the world title with a total of 237.515 points.

At exactly 12 AM midnight, Capellmann received the individual gold medal after already having won the team gold with Ulla Salzgeber, Klaus Husenbeth and Ann Kathrin Linsenhoff. The individual silver medal went to the Spanish Beatriz Ferrer Salat and Beauvalais. Ferrer Salat scored 82.825% in the kur (3rd place) and had a 234.385 total. The bronze medal was won by Ulla Salzgeber and Rusty. The combination won the freestyle with 83.775% but had lost too many points in the Grand Prix Special to finish higher than in bronze position. 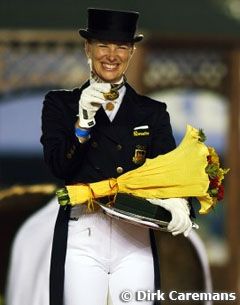 While the individual podium was the expected judged formation, the true winner of the competition stood an unfortunate fourth place. Debbie McDonald and Brentina were the only duo to ride a crisp, totally flawless freestyle which moved from one highlight into another. Brentina is such a stylish, elegant and powerful mare and in the freestyle she was with her rider every stride. Scoring a phenomenal 82.700% for her kur, it was not enough to have put her on her rightful podium place, which would have been the silver position.

Capellmann was strong in the Grand Prix and Special but burnt out in the freestyle. Farbenfroh piaffed without pezzaz, came deep regularly but excelled in his traversal movements. Beatriz Ferrer Salat rode an electric, energetic test but Beauvalais is too often tight in the neck and his movements become hectic instead of controlled. Being the home favorite due to her Spanish nationality, Ferrer Salat probably received a tidbit more than she earned. Salzgeber's musical composition still moved the crowds the most, but Rusty was ticklish in the piaffe with his right hind and broke into canter in the extended trot.

Judge at H, Mariette Withages, judged the freestyle in the way the podium places should have been distributed: gold for Capellmann, silver for McDonald and bronze for Salzgeber. Judge Volker Moritz, however, commented that "it was a brilliant test, otherwise she would not have got an 82%, but she [Brentina] was just not quite as engaged from behind like she was in the Special, and there were a few small mistakes." 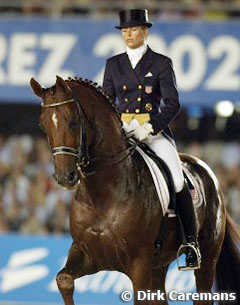 American Lisa Wilcox scored 82.650% with her kur and ranked fifth overall. Her Relevant just lacked that bit of power needed for a flashing extended trot and seemed tired in the passage. Yet, the chestnut was better and steadier in the mouth than the two tests before and the combination has definitely made its break through on the scene as one of the top five riders in the world.

Sue Blinks had the show of her life time. Both the Grand Prix and the Special were Flim Flam's best tests ever, but he had a little "stage fright" for the freestyle. Scheduled for the evening, the freestyle with the spot lights and music made the arena look bigger and more scary for Flim Flam than the days before.

Chef d'Equipe of the American dressage team questioned the judging of the freestyle. "We are at a historical moment in time, in which the judging is changing and some judges chose the safer path instead of the newer, more open path," she said.

Read an extensive report of the freestyle later this week as coverage of the 2002 World Equestrian Games continues to grow.