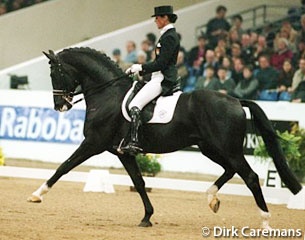 Dutch dressage rider Coby van Baalen has won her trial to reclaim Ferro for training and competition. Van Baalen filed for a lawsuit when the owners of Olympic Ferro, Jan Lamers and Adriaan van der Goor

, decided to pull Ferro out of the competition sport and concentrate him only on breeding.

They claimed that their contract with Van Baalen (set up in 1996) was closed during an oral conversation after the Olympic Games of Sydney, but Van Baalen said that was not true.

A judge in 's Hertogenbosch, The Netherlands, decided that Ferro is to stay with Van Baalen until the 2004 Olympic Games in Athens, in accordance with the first and only contract set up by Lamers/Van der Goor and Van Baalen. The veterinary reports provided by the owners did not say that Ferro's sport career has ended and the horse still has the capabilities to compete later this year. Coby van Baalen is allowed to decide in which competitions she can start between October and January and during the breeding season, she pick shows in agreement with the owners.

After the verdict, the owners of Ferro immediately had to offer the stallion to Coby van Baalen for training, otherwise they needed to pay 50,000 € per day if they do not carry out the verdict of the court.