Ferro Back in the Arena With Hélène Aubert 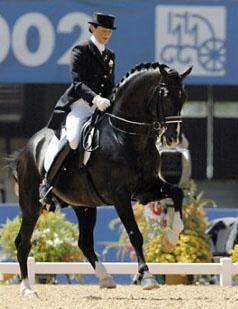 Former Dutch Grand Prix rider Hélène Aubert has been appointed Ferro's new rider. She will present Holland's most popular KWPN breeding stallion in several stallion shows in The Netherlands. "Aubert will be riding Ferro at stallion shows and so and we are taking the time to make a new kur to music for him," Mrs Lamers told Hoefslag.

Aubert is not the first rider who has been asked to ride the stallion, but many declined the ride because of the sensitive and difficult situation between Lamers/Van de Goor and former rider Coby van Baalen. According to Ferro's owners, the stallion is completely healthy and capable of performing in the arena.