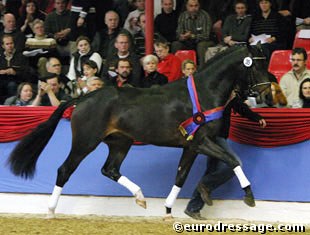 The first crop of Furst Heinrich colts marked the 2004 Oldenburg Stallion Licensing in Vechta, Germany. The Furst Heinrichs dominated the Licensing, as four out of five were licensed. Two made it into the premium ring and they won the 2004 Champion and Reserve Champion's title.

The Furst Heinrich fledglings were high flyers in Vechta, but they had to compete against two very strong Depardieu representatives. Sandro Hit was again the sire with the most licensed colts, with six out of eleven getting permission to breed. This year, however, only one Sandro Hit colt made it into the premium ring and that was an unprecedented nadir.

Thirty-six out of 75 presented colts were licensed, which is an almost 50% approval rate. The colts in the premium were all of very good quality, but there were numerous average colts that still got licensed despite obvious short comings in movement and conformation.

Nevertheless, the overall impression at the 2004 Oldenburg Stallion Licensing was that the quality of the horses was high, their confirmation in general was modern, and their movement mechanism elastic and engaged. 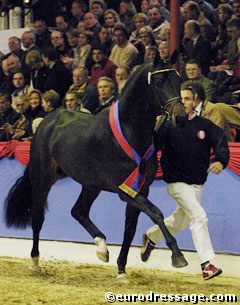 Bred by Arend and Doris Boekhoff and presented by René Tebbel from Emsburen, Germany, this modern Furst Heinrich was the deserved champion of the licensing. The horse has a very solid conformation, elegant and modern but without being too refined. His gaits are outstanding, with a very good walk, and an excellent trot. Furthermore, this bay can jump, which is not much of a surprise having the Olympic eventing silver medallist Volturno as dam sire.

"He's a very nice appearance," licensing committee member Uwe Heckmann told Eurodressage. "He has a very good topline and a good conformation. His movements are elastic and he swings through the body. His basic gaits are very impressive and he has the radiance of a champion. He also went well over the jumps and has a very interesting blood mixture."

The colt started his Vechta career as a foal, being sold for 11,500 euro to the Nordrhine Westfalian area at the 2002 Elite Foal Auction. He then carried the name "Frischer Wind," (Fresh Breeze). Dam Viarelle has a 2004 born Furst Heinrich colt on the ground and has been inseminated again with Furst Heinrich this year.

A New Career for René Tebbel ?! 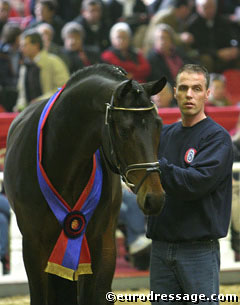 German equestrian journalist Jan Tönjes wittily remarked that René Tebbel has found a new destination in life: rearing dressage horses. The German international show jumping team member Tebbel is employed at Gestut Sprehe and trains the show jumpers, normally. In his "spare time" he also rears young horses and he seems to have discovered a new road to success: the young dressage horse.

The 35-year old René Tebbel presented four horses at this year's Oldenburg licensing. Three of them were licensed, one was Champion and the other was Runner Up.

Placing third in the premium ring was Tebbel's Donnerhall x Feiner Stern x Aktuell x Futuro colt. This black stallion was bred by Ulrich Brinkhus and is by Donnerhall out of elite mare Wild Rose who descends from the renowned Weissena dam line.

This black colt showed wonderful gaits in hand, with a very nicely engaged trot. He was sold at the stallion auction after the licensing for 60,000 euro to Gestut Tenterhof in Ratingen, Germany. 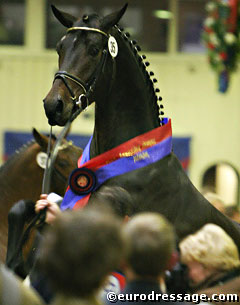 There are three very exciting moments at a stallion licensing. The first moment is when the committee announces which stallions are accepted or not, the second moment is when you hear which stallion has become the licensing champion and the third moment is witnessing the auctioning of these young talents. Prices soar in tough bidding duels when a licensed, premium stallion is offered for sale. Unfortunately, the 2004 Licensing champion was not presented for sale, as the bay had already been sold one week before the licensing, to the Dutch show jumping (!) stable Eurocommerce in Lochum, The Netherlands.

Intrigued by the fact that a Dutch show jumping stable has purchased a German dressage bred Furst Heinrich offspring, Eurodressage made a late Sunday night phone call to Ger Visser Jr., manager of Stal Eurocommerce. "We are stallion station with show jumping stallions," Ger Visser Jr explained, "but we want to be a complete station, which means that we have to offer dressage stallions as well. We want to satisfy our customers because some of them have jumper mares, and others have dressage bred mares."

Eurocommerce discovered the Furst Heinrich x Volturno through a liaison, who had sent them a video tape of the horse. "Last week Sunday we went to the barn in Germany to take a look at the horse. We liked him and on Monday we bought him," Visser Jr. said. Visser praised the Furst Heinrich colt for his overall beauty and good gaits. "He's a super lovely horse and moves with great ease. He has a very engaged hind leg. His walk, trot and canter are all very good."

Not knowing that the bay colt would be approved or not, and not even imagining that he would become the 2004 Licensing Champion, Eurocommerce spotted talent in this horse and bought him from René Tebbel a week before the licensing. The Dutch stable had a lucky break when their recently purchased star became the grand champion of the licensing. "You sometimes need more luck than wisdom," Visser Jr. said, hitting the nail on the head. "Of course he needs to be talented, but horses is "made" and you have to work on their future."

Stal Eurocommerce has not yet given a name to their Furst Heinrich champion, but they have already made plans to present him at the KWPN licensing. "Eurocommerce names all its horse to a location, so we have to come up with a good "V" name for the horse." Depending on his acceptance to the KWPN studbook, the Furst Heinrich colt, who used to be named 'Frischer Wind', will receive a Dutch Warmblood V-name or a German bred F-name.

Ger Visser Jr. further disclosed that a professional dressage rider will be training the stallion in the future, but he could not yet mention a name as they stallion station had not yet decided on a rider. 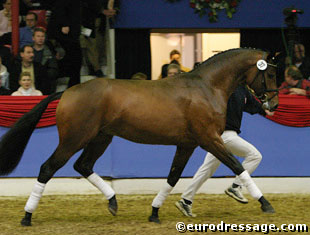 The bay Furst Heinrich x Singular Joter was a lovely young colt with a nice conformation and a strong walk and trot. The youngster could have had a bit more shoulder freedom and length in the neck, but he was engaging nicely from behind and is overall an very interesting prospect for the future.

Bred out of Silence (Singular Joter x Matcho AA x Goldstein), this bay colt has been sold to Gudula Vorwerk-Happ of Gestut Vorwerk in Cappeln, Germany, just before the licensing. "We've bought this stallion to modernize our stallion station," Gudula Vorwerk told Eurodressage. "This horse has no weaknesses and his basic gaits are very convincing to me."

It is fascinating to see that a major stud farm in Germany, like Gestut Vorwerk, has decided to add a Furst Heinrich colt to its breeding program. Renowned for their R-line stallions (Rubinstein, Rohdiamant, Relevant, etc), Gestut Vorwerk is opening a window to the future by purchasing this Furst Heinrich colt. Yet, they are also very "retro" in their acquisition by bringing old Furioso II blood back to the farm. Vorwerk discovered the French stallion Furioso II and imported him into Germany in the 1970s. Furioso II has been a foundation sire for the Oldenburg verband and for many more breed societies in Germany. Furst Heinrich descends from the line of Florestan - Fidelio - Furioso II.

The Furst Heinrich colts proved to be very modern young stallions and the first crop of colts was no disappointment. "The Furst Heinrichs were very convincing," Uwe Heckmann said. "They are very modern and have a meaningful topline with good hindlegs and they stand correctly in the rectangular model. It is good to have this new blood for Oldenburg." 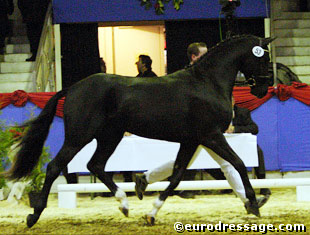 While the Furst Heinrich colts were eye candy to the audience, the two Depardieu colts were without a doubt the crowd favorites. Placing fourth in the premium ring was the refined Depardieu x Lavauzelle AA x Inschallah AA x Praefectus xx colt. Bred and presented by Karin Lindena, this Depardieu x Lavauzelle AA looked very thoroughbredy. His movements were quite alright, showing good rhythm but he could have flexed his hocks more in the trot.

The Depardieu x Lavauzelle is not a premium horse because of his movements; it is his exotic bloodline that makes this horse a welcome addition to the Oldenburg breeding program. Carrying pure AA and XX blood in the dam line, this horse can be a very good choice for heavier type mares. This black star achieved the top auction price of 130,000 euro, selling to Gestut Holkenbrink in Westfalen.

The absolute star horse of the 2004 Oldenburg licensing was the bay Depardieu x Feiner Stern x Goldpilz x Furioso II. Bred by Aloys Klaas from Lingen, and presented at the licensing by Johannes Westendarp and Bernhard Fischer, this bay colt had an awe inspiring trot. This one pulled his hocks up to his belly and stepped under while swinging through his body. He was a dancing delight. The crowds went wild when they saw him enter the ring and more than once did the handlers have to run an extra round because everyone liked this horse so much and wanted to see more of him. 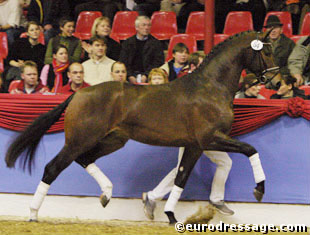 It was no surprise that this lovely colt fetched the top price of 130,000 euro at the auction, selling for the same price as the other Depardieu. Buyers of this wonderful young dressage stallion were Mr and Mrs Bechtolsheimer from Great Britain, who will ensure that the young stallion will have a very promising dressage career with trainer Markus Gribbe and daughter Laura Bechtolsheimer.

Absolutely worth mentioning is that dressage rider Johannes Westendarp presented three horses for licensing, and got them all accepted. Two of them made it into the premium ring, the Depardieu x Feiner Stern placed fifth and his Wolkentanz II x Goldstern finished 11th. The bay Wolkentanz II has been sold to stallion owner Mike Kanitsky. Westendarp's third licensed colt is a chestnut Wolkentanz II x Davignon stallion, who is bred by American Holly Simensen.

Within one year time, Westendarp was able to get the two top priced stallions at two different licensings. At the 2003 Hanoverian Stallion Licensing, he sold Rosentanz (Rohdiamant x Sao Paulo) for the highest price to Denmark, this year his Depardieu was the highlight of the Oldenburg stallion auction. The Wolkentanz II x Davignon, however, was not for sale. "I'm keeping him, because he's incredible under saddle," Westendarp commented. Maybe we see this star back at the Bundeschampionate??