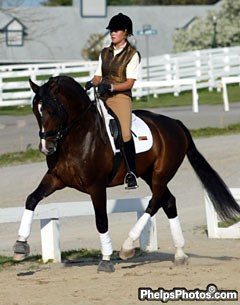 held June 15-18 in Gladstone, NJ, as part of the USET Festival of Champions.

Brentina is one of the most successful horses in the history of U.S. dressage, and her performances have helped establish the United States as one of the top countries in dressage. In 2002, Brentina led the U.S. to a Team Silver at the World Equestrian Games, and in 2003 was named the winner of the FEI World Cup Dressage Final. She went on to lead the 2004 U.S. Olympic Dressage team to a Bronze medal and scored an individual third-place finish at the 2005 FEI World Cup Dressage Final (presented by Offield Farms) in Las Vegas. The sponsors of the 2006 Brentina Cup are Mr. and Mrs. Parry Thomas, owners of the 2005 USEF Horse of the Year, Brentina, ridden and shown by Debbie McDonald.

The Brentina Cup is open to riders between the ages of 18 and 26 who are competing at the Intermediare-II level. Designed to assist and encourage today’s young riders as they transition to the senior grand prix ranks, the Brentina Cup will shed much-needed light on tomorrow’s stars – today.