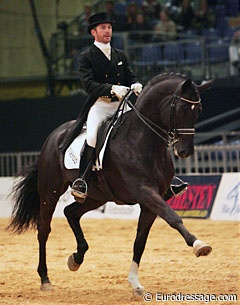 The licensed Danish warmblood stallion Zardin Firfod is in training with Danish Grand Prix team rider Joachim Thomsen. Zardin is confirmed at small tour level and is being prepared for Grand Prix. He was previously trained and competed by Danish Olympic team rider Per Sandgaard

, who changed his Danish nationality to become Swedish last year.

Zardin Firfod is by Gribaldi out of Zawanna Firfod (by Schwadroneur x Goldlack). The black stallion was the champion of the Danish warmblood stallion licensing in 2001 and won the stallion performance test in Vilhelmsborg. Margit Ørum placed third with Zardin at the 2002 Danish Young Horse Championships and Per Sandgaard competed him at FEI Level.

Thomsen has been training Zardin for one month now and is thrilled to ride this horse. He will be competing Zardin this winter at shows in Denmark and present him in the stallion show at the 2007 Danish Warmblood Stallion Licensing in March.