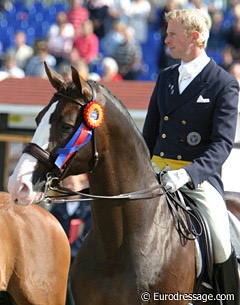 At the first ever Swedish Riders' Gala, Bjorsells Briar was proclaimed Horse of the Year 2006. A sell-out crowd attended this black tie affair in Sweden to witness the proclamation of Briar as Horse of the Year, and of Ann and Torsten Pehrsson as Breeders of the Year.

Jan Brink lost the title of Rider of the Year 2006 from Rolf-Göran Bengtsson by a nose length.

The 15-year old Swedish warmblood stallion Briar (by Magini x Kroket) was the most successful Swedish warmblood horse competing internationally this year. Under Jan Brink, Briar placed 8th and 9th at the 2006 World Equestrian Games in Aachen. At the Gala Evening, Brink thanked Briar and the team surrounding the stallion for their outstanding performances this year. He also expressed his special thanks to breeder and owner Hans-Yngve Goransson. Stressing the importance of good horse breeding, Goransson mentioned, "I would like to thank Briar's mommy and daddy, Charis and Magini, too."

The Breeder(s) of the Year was the married couple Ann and Torsten Pehrsson who bred the young dressage horses Gicea and Hermes, both by Rambo x Urbino. Under Anne Svanberg, Gicea and Hermes placed in the individual finals of the 2006 World Championships for Young Dressage Horses in Verden. The 5-year old Hermes finished fourth individually.

Jan Brink was nominated for Rider of the Year but was beaten by show jumping rider Rolf-Göran Bengtsson.