Dressman I Retired to Stud 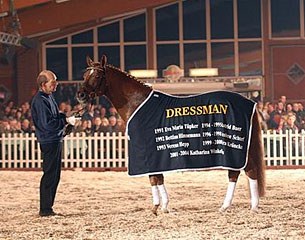 Dressman I, one of the most successful FEI dressage ponies ever, has been retired to stud. The 19-year old Westfalian Riding Pony Stallion was retired in a special ceremony at the Beckmann/Schurf stallion show February 9, 2007.

Dressman I is bred by Heinrich Sondermann from Haltern am See, Germany, and was rearder by Heinz Rohmann. Owner Adolf-Theo Schurf leased the pony stallion to three German pony riders who won with him six team gold medals and two individual gold medals in total at the European Pony Championships. His medal clinging riders were Astrid Buer, Desiree Schurf and Katharina Winkelhues.

Dressman was the champion of the 1991 Westfalian Pony Stallion Licensing in Munster, Germany. He won the 30-day stallion test in 1992 and so far has produced 30 licensed sons and 20 State Premium Mares. He was the first pony to ever win the Bundeschampionate four years in a row. He was three times German Pony Champion, four times Rhineland Regional Champion, and he won the Preis der Besten and the German Pony Derby.

View the Photo Shoot of his retirement ceremony