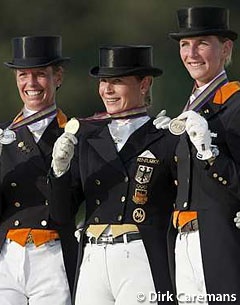 Isabell Werth took the highest step on the podium for the medasl given to the top three in the Grand Prix Special. Aboard Madeleine Winter-Schulze's Hanoverian gelding Satchmo (by Sao Paulo), Werth scored 78.360%

and stayed almost a full percent ahead of Anky van Grunsven on her Hanoverian gelding Salinero (by Salieri) who earned 77.480 % for their ride. Imke Schellekens-Bartels claimed her first international individual Championship medal by riding the Hanoverian mare Sunrise (by Singular Joter) to a bronze medal position on a score of 75,920%.

"Today’s result is very important and confirms the fact that I’ve always trusted Satchmo," Werth said at the press conference. "Even after the bad period we had four years ago due to some problem to his eyes. In the past two years he has been working very well. Last World Equestrian Games in Aachen represented a very special experience for this horse and me. I actually came back as a winner in front of my home-fans after many years. The atmosphere here is completely different, with a lot of pressure. After Grand Prix performance everybody had some expectation… but we made it. This Fei European Championship Dressage 2007 is therefore very important for both of us," she concluded.

1994 has been a top season for Hannoveraner dressage horse as all medallists were born in that year!

Back to the 2007 European Championship Index