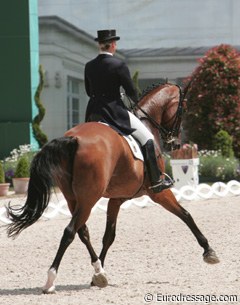 Saturday morning at the CDIO Aachen kicked off the CDIO Grand Prix Special. Twenty-nine combinations qualified through the Grand Prix for the Special. The top two of the class remained the same: a supreme Isabell Werth in the lead and an outstanding Adelinde Cornelissen in second place.

Isabell Werth spearheaded the ranking with a 78.640%. She received 9s and a 10 for unimprovable trot half passes and straight tempi changes every single and two strides. The extended walk could have been a bit more groundcovering and the first transition from piaffe passage was a bit hesitant, but the second was flowing. It was yet another outstanding performance by the Rheinberg based Werth and Madeleine Winter-Schulze's Satchmo. All five judges ranked Werth first and the German judge Gotthilf Riexinger scored her, in fact, the lowest of all, disproving the stirrings of the Dutch that Riexinger would judge patriotically.

The panel of judges was also unanimous in their scoring of Dutch rider Adelinde Cornelissen. Her test with the long legged Parzival was the second best of the day. Cornelissen confirmed her outstanding form by putting in an extra notch in Special and scored even higher than in the Grand Prix: 75.200%. In the trot tour Parzival moved with good engagement and suppleness. The extended walk was outstanding with three hooves overtrack. The transition from walk to piaffe on the serpentine was early bit well executed. The tempi changes earned her straight 8s. In the final piaffe at X, Parzival had some trouble keeping his balance as he opened up his front legs more than usual but the piaffe-passage centerline was lovely. It makes one wonder why Holland is leaving home its most beautiful rider of the moment for the Olympic Games.

"75.20% is my personal best score," a joyful Cornelissen confirmed. "Parzival was really super on the job and responded well to my aids."

The Aachen citizen and local hero Nadine Capellmann finished third after being generously scored 72.24% for her ride with Elvis VA. Her Special rider started out better than her Grand Prix with lovely extensions, but the rhythm in the half passes could have been clearer. The extended walk was ok. In the transition to the first piaffe Elvis blocked for a moment but recovered quickly. Tension was building up in the horse and Nadine was struggling with the contact with the bit. The two tempi's were good, the ones on the diagonal too short and one on the centerline was a double beat behind. 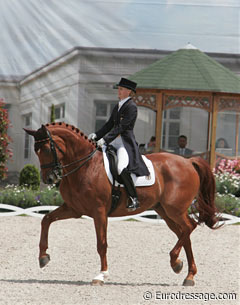 "I found the canter tour better than in the Grand Prix, unfortunately some of the half-passes weren't very good and we also had our differences at the beginning of the first piaffe. But overall I was satisfied with our ride." she commented.

Swiss Silvia Ikle and her Swiss bred Salieri are in good form and finished fourth with 72.160%. The test was not errorfree, but it had some gorgeous stuff in it. Salieri's piaffe and passage finally earned him 8s and 9s but could easily have been 10s for its regularity, looseness and clear transitions. The extended walk barely sufficed and a mistake in the one tempi's lowered the total score.

"Salieri presented himself in outstanding condition. He was highly concentrated and in top form," Ikle said. "If you want to find a point of criticism, you can point at the small mistake in the one tempi's but in general he went brilliantly."

Finnish Kyra Kyrklund and her Swedish bred Max ranked fifth (71.560%) and were followed by Heike Kemmer with Bonaparte. Kemmer circled the ring pulling her chestnut's head from left to right which resulted in a very tight neck during the ride. The trot was energetic, light footed and expressive with great extensions, good passage and a fantastic extended walk, but transitions from piaffe to passage and from passage to canter were difficult and there was a mistake in the one tempi's. They scored 71.160%

"I had to buckle the girth half a hole tighter than usual while warming up, because Bonny has lost some weight," Kemmer explained. "I think it was too tight, which bothered him a bit. However, he still performed very well, unfortunately I pushed him on too much in the one tempi changes, and my leg aid was too strong in the upward transition to canter. Annoying technicalities, which cost us valuable points." 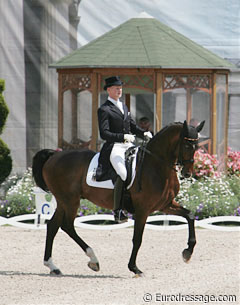 In the Grand Prix, Sterntaler was dangerously explosive in all piaffes and refused to perform the final piaffe at X. In the Special, Rath rode considerably better and earned high points for Sterntaler's strong points: the extended walk (one 10) and trot (9s). The second pirouette was not good. In the piaffe on the serpentine, he was extremely careful, in the final piaffe at X the rider got scared to perform it and had his horse show only three steps! The flying changes were straight and big. It was a test full of extreme heights and lows. Rath has only been riding the dark bay gelding for 4 months and there is much potential for the future. The 2008 Olympic Games, however, come too early for them.

"Sterntaler was in much better form, his canter tour was much better and the first piaffes were good. Things got a bit hot in the last piaffe, but I decided to ride out of the piaffe prematurely before he turned round again. I think that was the better solution in this case," Rath explained,. "It is great fun riding in this stadium, the atmosphere is simply incredible."

The best fifteen riders of the Special qualified for the Kur on Sunday.