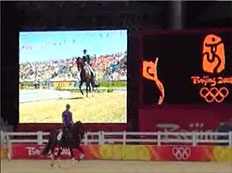 For the dressage riders, the 2008 Olympic Games in Hong Kong start in one week time but a major problem seems to have arisen after the first few training sessions in the main ring.

The big television screen is causing trouble with the riders as horses spook from the almost ten meter high video footage broadcast on the screen. Gigantic horses trot by on the screen and catch the attention and fright of several horses.

According to Horses of the Dutch, Isabell Werth's Satchmo freaked out from the screen during the last training session yesterday evening before tropical rain storms hit Hong Kong and closed the city off for a day. Satchmo spooked so hard that he almost fell on his back. Werth is said to be considering to send out an official protest against the big screen and is requesting it to be turned off during the test.

"The day before yesterday, Satchie got the scare of his life," Werth said. "Right near the show ring, there is a huge monitor on which all the rides will be shown. Many horses, especially the sensitive ones, spooked from it, when they saw their gigantic silhouette so close by. The riders have discussed this and considered to appeal against it, but at the moment the problem has solved itself. The monitor is not very technically reliable, and it can not be guaranteed that it will work during all rides, which will lead to unequal circumstances for the participants. So for the moment, the thing will stay shut down. For the better!" 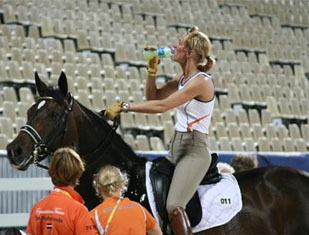 On her website, Anky van Grunsven wrote that Salinero was also looking with strange interest at the screen, but she has had no problems steering him past it. Dutch eventing horse Oncarlos was also spooking from the screen and gave his rider Tim Lips a hard time. The levelheaded eventer, however, said: "I still have a few days to train." Imke Schellekens-Bartels' Sunrise apparently has no problems with the sceen. "They can keep it there," Imke said. Hans Peter Minderhoud is familiarizing Nadine with the big screen. "Horses do have to get used to those moving images," he said.

Van Grunsven is keeping a blog on her website about her Olympic experience. If she wins another gold medal in Hong Kong, she will become Holland's most successful athlete of all times!

"Besides riding my horse in the evening, I'm training Hans Peter and Tim", Anky said. "That keeps me busy the entire evening. Because it's often very late before we get back to the apartment, I take it more easy in the morning. During the day, I usually do something with the kids. Today, we went to Disney World Hong Kong. Both Yannick Janssen and Ava Eden had a great time." 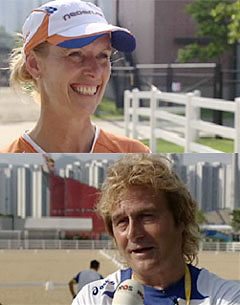 In an interview with the Dutch national television (NOS news), Anky's Sjef trainer was asked if this year would be the year that the Dutch team would beat Germany, and Janssen quipped, "you should ask if the Germans are going to beat the Dutch." The assertive Janssen, who is the official Dutch team trainer and Anky's year long individual coach, has all the right to say that it will be very hard for the Germans to beat The Netherlands this year based on the lower than average scoring performances of the Germans this show season.

When asked when the last time Germany lost team gold, Anky joked, "by the Russians in 1920 or so," and Janssen wittily added the funny remark "1611 I think." (1980, 1972 is the correct answer). The reporter continued that he heard through the grapevine that Holland was the favourite for the gold, Anky was smart to retort, "never count out the Germans, this has been proven often in soccer in the past. They keep on riding till the end, but so do we!"

Back to the 2008 Olympic Index