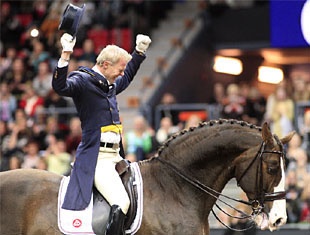 Already in his hotel room Jan Brink started focusing on the challenge to give the very best of himself and his 18-year old stallion Briar for their very last ride in Sweden. “I felt emotional in a positive way. Doing the last test ever in your own country is quite something,” said Jan Brink. From the moment the pair entered the arena in the Scandinavium the audience went wild. Everybody knew this pair had made history for Sweden and they honored him with standing ovations, clapping, yelling, and cheering.

“I really wanted to show my home country what this Swedish horse had brought them. And I was so inspired that I really did manage to make Briar go the extra mile! Briar still doesn't feel old and he could go on doing this for much longer, but I have decided that this was to be his last show. It’s wonderful that we managed to save the best for last,” Jan continued.

Chair of the judges, American Linda Zang, said she enjoyed every minute of the competition keeping the tension high right until the very end. “It was really good sport. I enjoyed it all the way”, Linda Zang said. She added that she wasn’t aware how close the competition had been until she had actually studied the results. She travelled from last week’s Neumünster horse show to Gothenburg and from there will go back to America to judge the Palm Beach Derby CDI and the World Cup Final to come. Linda Zang judged some riders twice within a week. “I was attracted by the nice uphill and forward image of Donatha S under Ellen Schulten Baumer. Here in Göteborg they showed much more to their advantage” Zang concluded.

In the Grand Prix Briar and Brink really were close with Catherine Haddad and Cadillac. But Catherine Haddad didn’t quite have the full attention of Cadillac today for his first piaffe and passage tour and so she lost the ability to keep her horse in front of her leg. At the press conference Catherine explained she had been sick with food poisoning, which made her less concentrated during her test.

For Jan Brink and Briar the Göteborg Horseshow was their farewell. For Swedish colleague Minna Telde the Gotebörg Horse show, however, formed the premiere. She rode a brand new Freestyle with new music of U2. Linda Zang was very impressed with the Swedish pair, which took an extra risk performing this new kur. “I only got my music last Monday and was thrilled with Don Charly’s response to it. He responded better than I expected in doing the two tempi and one tempi changes right to the music”, Minna Telde explained. After Christmas Minna Telde bought Don Charly from his former owner and now owns the horse completely. “Which is a very good feeling”, Telde concludes. Because of her good results she has almost qualified for the Final. “If I want to be certain, I need to add the last show in ‘s-Hertogenbosch to my schedule,” Telde said,

Tension is building up towards the Final

Anky van Grunsven had to withdraw from competing as serious back problems left her home. She intended to ride Salinero in Göteborg as she needs to ride two WC qualifiers to meet the regulations to defend her title. Now only ‘s-Hertogenbosch is left, which might lead her to choose Painted Black as her horse for the Final.

Jan Brink will refrain from travelling to ‘s-Hertogenbosch. “I am very much in favor of the s’-Hertogenbosch show but I have to keep the welfare of my horse in mind too. It might be too much with Las Vegas coming up,” Brink concluded.